One of the main reasons for getting this site up and running is so we have a solid base to fall back on should we lose our social media accounts.  Unfortunately, this is a worrying trend that appears to only affect those on the right.  The recent co-ordinated removal of Facebook, YouTube and Spotify accounts held by InfoWars' Alex Jones is a case to note.  Whether or not you agree with the conspiracy-obsessed hothead is irrelevant, why should his online liberty be crushed while other equally fanciful accounts be allowed to flourish?

It's bias, plain and simple.  And we are not immune to it.  The more likes and shares our Facebook account receives the more likely we are to run into left wing trolls.  In the early days we could ignore them, not one person was banned from our page for the first three years.  Then Facebook came for us.

All of the bans BTLP has received have been for memes we've posted.  Occasionally Facebook would not even indicate which memes had "violated their community standards" and not once have they stated which specific "community standard" has been "violated".  Two of the offending memes are reproduced below. 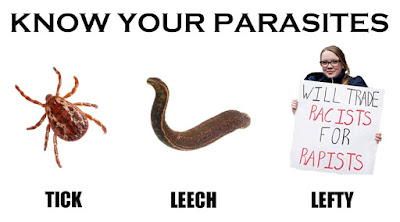 No one can argue that Facebook is not biased in favour of the left.  Who can forget the words of Mark Zuckerberg himself when confronted by Sen Ted Cruz at the Congressional hearing earlier this year.


Therefore, it's no great surprise that you so easily locate Facebook pages glorifying hatred and violence, but as long as the victim is not some perceived "minority" this is acceptable.  There is actually a Facebook page that features John McDonnell and a rifle as its profile picture, but we are singled out for what?  Pointing out this hypocrisy?  Speaking about Muslim rape gangs?

Given such bias in how it deals with complaints, this is why we are now forced to remove trolls from our page.  In addition to this we have had to censor ourselves somewhat in what we post.  These tactics led to a lengthy period (most of this year) in which the page was left alone by Facebook.  However, this changed on July 28th when a rather innocuous meme was posted (one which had gone viral previously from other sources) and another ban was in place within hours.

This was the message we received from Facebook, again no indication as to which of their much vaunted "community standards" this was supposed to have violated. 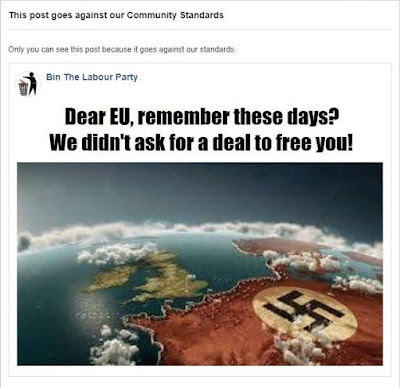 We can only assume that some left leaning snowflake in their Dublin (European) HQ was triggered immediately by the sight of the swastika without much thought for the concept of the meme.  Or perhaps it played on some deep seated shame for the cowardice of the Irish Republic during World War II - referred to as the "emergency" in Ireland.  Who knows, but this is arguably the tamest meme for which we've been censored.

We'll fight on, of course, regardless of the bias.  Our reach is more extensive than ever before, with a YouTube channel in its infancy and now this blog.
at August 21, 2018