On Saturday afternoon we were suspended from Twitter following a tweet by Richey that shared a YouTube video featuring retired healthcare professional Dr John Campbell.
Dr Campbell has run a YouTube channel since 2007, but came to prominence during the 'pandemic'.  His scientific and non-partisan analysis of raw data has drawn both praise and a huge following of 2.4 million.  Over time his analysis has led him to conclusions that are not exactly vax-friendly.  Such views are becoming more widespread as the scale of the deception unfolds, but you won't be hearing it from the media shills of big pharma.  At a time when there are more than a thousand unexplained excess deaths each week in England and Wales alone, their silence speaks volumes.
In this intro video for his channel, Dr Campbell outlines his qualifications and teaching history.  He's not the liveliest of presenters - you've been warned...
In one of his latest videos, Dr Campbell analyses a Thai study of cardiovascular side effects in adolescent vaccine recipients.  It was the sharing of this video that got us suspended from Twitter on Saturday.
The sample size in the Thai study was relatively small at 301, but almost a third of the group suffered some form of cardiovascular side effect after a second dose of the Pfizer jab.  Dr Campbell spends around 14 minutes poring over the data, before discussing his own feelings about it.  He expresses frustration that no similar studies exist here in the West and also criticises the blanket approach to vaccination in the UK and elsewhere: "The whole point is that we treat people holistically and individually, not as populations".
The full video can be seen below.
The offending tweet is still visible on Twitter, albeit the 'fact-checkers' have attached a 'misleading' label on it and prevented users from commenting on it (see screenshot below). 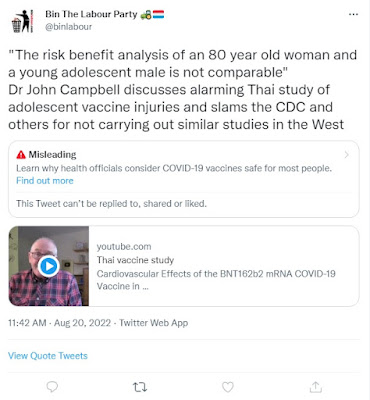 The message relayed to us by Twitter was as follows.  Note the final line, where it reads: "If you think we've made a mistake, you can appeal this violation."  There is a blue 'start' button below this statement, but when clicked it merely led back to our Twitter feed.  There was no 'appeal'. 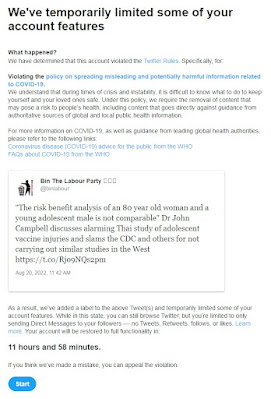 This is tech tyranny at its finest.  Like their mass media counterparts, Twitter does not tolerate anything critical of Covid vaccines - including awkward scientific facts.  Anything that does not follow the 'safe and effective' narrative is classified as 'misleading' and/or 'disinformation'.  We are truly living in Orwellian times.
at August 20, 2022