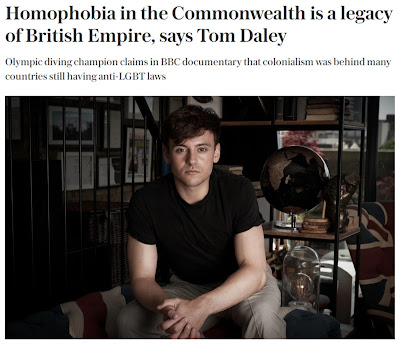 Olympic swimmer Tom Daley has been roundly mocked for his bizarre assertion that the root cause of homophobia in Commonwealth countries is British colonialism.  Historians were quick to point out the absurdity of his theory, including those from Commonwealth backgrounds.  Dr Zareer Masani wrote: "I can assure [Daley] that male homosexuality in India carried penalties under both Hindu and Sharia Islamic law long before the British Raj."  Another, Professor Robert Tombs wrote: "The BBC, through Daley, has yet to visit Saudi Arabia or Iran - neither of which were colonised - to complain that homophobia there is 'a legacy of Islam'."
Therein lies the problem.  Daley is just a symptom of the wider left narrative that dictates only white people, usually white men, are to blame for everything bad in the world today.  At one point during the documentary Tom reacts to the separate issue of slavery: "It honestly makes me feel sick to be British."  Such a statement is a typical response from someone who has bought into woke ideology, which routinely seeks to undermine Western civilisation with the ultimate aim of destroying it and replacing it with communism.
Of course he may just be dumb enough to be totally unaware of Britain's role in abolishing slavery and his BBC handlers were certainly not going to fill him in on it.
From critical race theory to the toppling of statues, we are witnessing an all-out assault on Britain, her history and those of us who are ethnically British.  While schools and universities indoctrinate our youngsters into a lifetime of shame and serfdom, the BBC and Hollywood pumps the same propaganda into their heads outside the classroom.
Never be ashamed of who you are.
at August 11, 2022