The odious member for Penistone and Stocksbridge certainly appears to have got her comeuppance.  Angela Smith, of ardent remoaner fame, has lost a no confidence vote in her constituency.  Not so much to do with the fact she has consistently opposed Brexit in a massive Leave constituency, but her criticism of the Great Leader.  Dissent will not be tolerated in Corbyn's Labour and the Momentum deselection train last night rolled into the steel city and struck her a severe blow.

Ironically she was one of the MPs who backed a vote of no confidence in Corbyn two years ago and supported her namesake Owen Smith in the subsequent leadership contest.  Clearly Angela has had this coming a while.  Since then she has dared to question the re-nationalisation policies of the Great Leader and she is currently peddling a 'People's Vote' petition addressed directly to Corbyn.

It is this ardent and unapologetic remoaning - in the face of a 61% Leave constituency - that leads us to maintain dry eyes when it comes to her current predicament.  Whereas we have struck a sympathetic chord with some centre-ground MPs attacked by Momentum's deselection campaign (Frank Field, Kate Hoey etc), Angela Smith is a vile individual who deserves no such sympathy.  In addition to her Brexit blocking record in the Commons, she has also attempted to conceal her expenses.  In 2007 she voted against publicising MPs' expenses and it soon transpired why - she had claimed almost £11,000 in just two years, including four beds for a ONE BEDROOM FLAT!

Smith has responded to the deselection threat by denouncing her detractors as a "cabal of hard left members", an accurate description, but also vowed to fight on and "prioritise our area and my constituents".  Like you prioritised their Leave vote Angela? 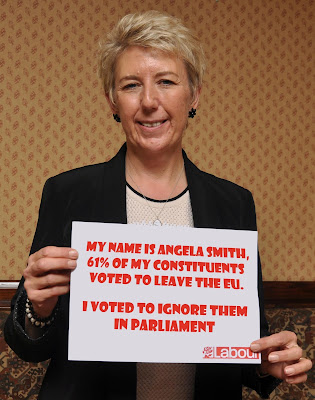