Diane, Diane, Diane.  Or 'Dianne' as so many erroneously refer to her.  There's only one 'n' in moron too.  This week Diane has been spouting off nonsense as she does most weeks, when she isn't having one of her mysterious illnesses that is.  On Thursday she gave a speech to the National Police Chief's Council.  How unfortunate for them.

Diane's key message was how bad Brexit will be for our old bill.  She announced to her beleaguered audience that Britain would become a haven for terrorists, gangsters and paedophiles upon leaving the EU.  Presumably she said this with a straight face.  This coming from a woman who is an advocate of open borders, who famously ridiculed Ed Miliband's pledge on immigration controls. 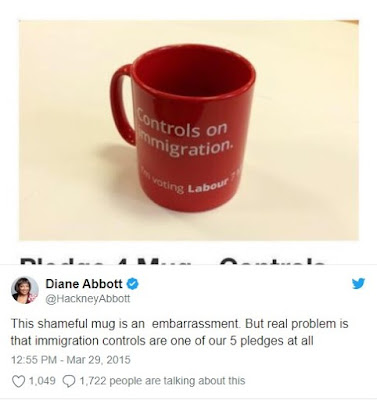 Diane explained to the police chiefs that criminals wanted by Europol would flee to Brexit Britain as a safe haven.  The main problem with this outlandish suggestion is that free movement will end after Brexit, whereas Labour would do the complete opposite and open the floodgates.  And for Diane to preach about terrorists and paedophiles flooding into Britain is a bit rich to say the least.  She is pals with terrorists and her party has overseen the greatest paedophile scandal of our time - namely the Pakistani grooming gangs raping white children en masse up and down the country aided and abetted by a conspiracy of silence within Labour councils (and in some cases more hands on).