THE NEVER-ENDING SHAME OF ROTHERHAM COUNCIL 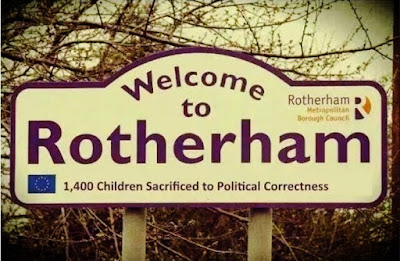 Rotherham Metropolitan Borough Council first received reports of child grooming in the town as early as 1999.  No-one was prosecuted until 2010.  The Jay Report of 2014 exposed collusion to such an extent that both the council leader (Labour's Roger Stone) and its chief executive both subsequently resigned.  The council's director of children's services (also Labour) initially refused to resign, but eventually bowed down to pressure.  Three Labour councillors were suspended by the party (one was later reinstated).  Local MP Sarah Champion was sacked from the front bench after daring to mention the very specific demographics related to the case ie. that the victims were overwhelmingly Pakistani Muslim men and the victims were overwhelmingly white.  A later inquiry deemed the council "not fit for purpose" and Stone's successor as council leader also resigned.

Today it has been revealed that Rotherham Council is continuing to assist the rapists.

Sammy Woodhouse was 15 when she was raped and impregnated by Arshid Hussain.  In a staggering move Rotherham Council have contacted Miss Woodhouse to inform her that Hussain has a 'right to access'.  This is actually much worse than it sounds because Hussain didn't contact the council - they contacted him!  Quite how a man who is serving 35 years in prison is going to have access to the child is left to the imagination.