When Diane Abbott appeared on Question Time last Thursday the obvious thing to look out for was one of her trademark gaffes.  However, what she actually left us with was concern for her health.  In addition to her puffed up face, eagle-eyed viewers noticed that her hand was shaking uncontrollably.  In the exchange below, watch her right fist after she rests it on the table...


Uncontrollable shaking is a symptom of Parkinson's disease, not in itself proof that Diane is afflicted, but when combined with her occasionally slurred speech and constant fumbling over numbers, one has to wonder.  Of course she could just have been very angry at Mr Peterson's clearly superior intellect and logic.  Our future Home Secretary does not like being told that she is not the moral judge of what is 'hate speech'!

In addition to Diane's apparent loss of motor function, there is also her occasional disappearances from public life.  For someone 'destined' to be our Home Secretary, this is clearly unacceptable.  Imagine for one second that she was the minister responsible for national security and our nation was struck by some awful disaster.  Sorry folks, the Home Secretary is 'feeling unwell', come back tomorrow.  Or next week.

Finally, the most damning proof that Diane is suffering from a serious illness came during a prolonged absence last year.  Her colleague Barry Gardiner was quoted as saying Diane had a 'serious, long term condition'.  When Diane finally re-emerged she announced that it was type 2 diabetes that had struck her down.  However, this is not consistent with the symptoms she has displayed and if her diabetes is so out of control how come she is pictured on the razzle so often?  Furthermore, how can she seriously expect to hold great office if she can't get her own blood sugar under control for a major TV appearance?

Let's hope Diane recovers from her mystery illness, for one thing she is a reliable source of frivolity and ammunition for those mocking the Labour Party.  She may be a despicable human being, a hypocrite and traitor, but we don't wish ill health on anyone. 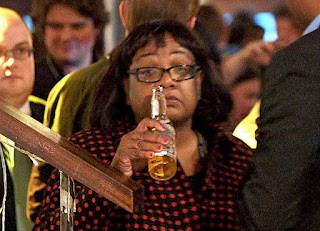 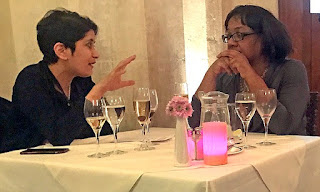