Over the course of the New Labour government our country faced an unprecedented wave of new legislation.  The number of new laws introduced by the Blair/Brown regimes is staggering, averaging more than two thousand per year, culminating in a record 3,506 new laws as the party left office in 2010.  Many Labour MPs have continued this crazed agenda since leaving government.  Most recently the attention has been focused on new 'hate crime' legislation proposed by several feminist MPs which includes criminalising 'wolf whistling' and 'cat calling'.  At a time when police officers are struggling to cope with serious crime and don't even bother with the likes of car crime and burglary any more, it's hardly appropriate.  But that's Labour for you, a bunch of MPs on a power trip eager to shape your thoughts and actions by way of legislation.

Thanks to New Labour the UK now has more CCTV cameras than any country on the planet, and yet they don't deter criminals.  We are being monitored every day of our lives, but for what purpose?  More than five per cent of the UK population is on the national DNA database, the highest figure in the world, and yet it doesn't reduce crime.  An Englishman's home was his castle before Tony Blair stepped into 10 Downing Street, but New Labour gave various agencies the right to enter your home.  Then there was the smoking ban. 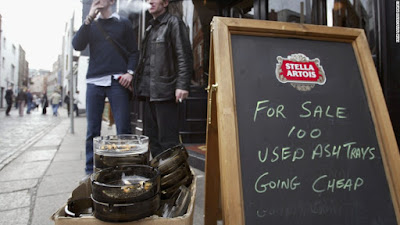 I don't smoke, never have, but I do like to go to the pub now and again.  While the smoking ban appears to have encouraged more people to give up, or vape, and that must surely be a good thing, it has brought many pubs to their knees.  Since the ban came into play 11 years ago this country has lost almost 12,000 boozers, that's over a thousand for every year of the ban.  That can't be good.  Pubs are often the focal point of a local community, take it away and people rarely congregate with others.  Labour knew this.  The smoking ban was never about the nation's health - it was about control.  They are still at it today.

The favourite to succeed the odious Carwyn Jones as First Minister of Wales has suggested that the smoking ban in Wales should be extended outdoors and involve a complete ban in town centres.  Cigarette smoke is a threat to no-one's health in the open air, so how on earth can his proposal be about health?  It's not, obviously.  It's just not good enough for Mark Drakeford that people's actions can only be controlled indoors.

Labour politicians just can't help themselves.  They have to dictate every aspect of our daily lives to an Orwellian extent.  Vote Labour get 1984.