by Richey Edwards
Labour MPs have been among the green advocates celebrating Shell's decision to pull out of the Cambo oil field development in the North Sea.  Ed Miliband was among the first to applaud the decision, just a few days into his new front bench role as 'Shadow Secretary of State for Climate Change and Net Zero'. 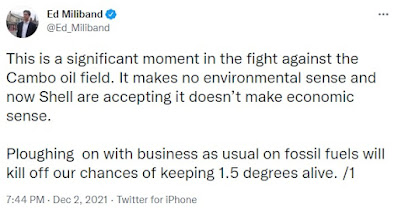 Ed's trumped up title was created as part of Keir Starmer's recent reshuffle and is intended to be a clear statement of Sir Squeaky's green credentials.  Last month Starmer urged Boris Johnson to veto the Cambo development.  This is one area where the Labour leader appears to share common ground with the far left.  Members of Labour's Socialist Campaign Group were particularly vocal about Shell's decision. 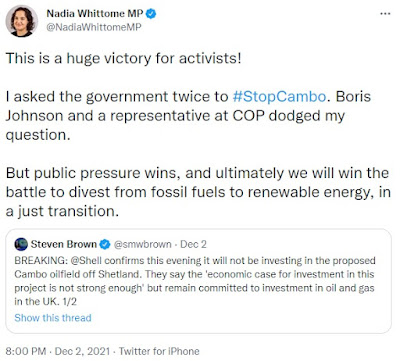 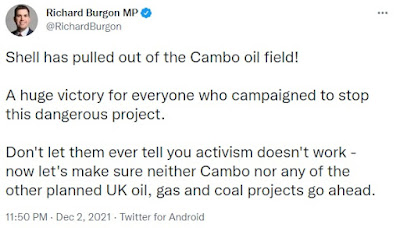 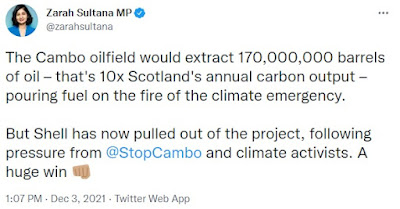 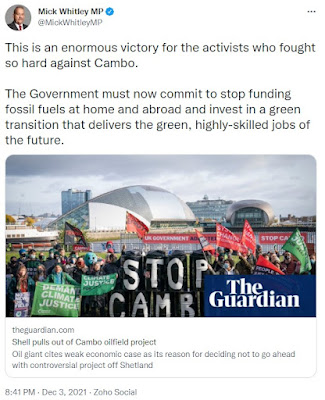 The delight of Burgon and co is clear to see, but make no mistake - they will all spend this winter in warm cosy homes courtesy of fossil fuels.  They can prove us wrong when they ditch their gas boilers and rely on a heat pump.  Let them be the ones who freeze when the weather turns, but no - it will be the poorest in society who suffer.  Either these MPs can't see that or they simply don't care.
Wind and solar are great sources of renewable energy, but this is Britain and the weather here is far from predictable.  There are days in which neither the sun shines or the wind blows.  That is not a reliable alternative by itself, but as always there is a political agenda being driven that does not necessarily have the best interests of the environment at heart.
The left and the green agenda go hand in hand.  It's no coincidence that all the major green parties around the world follow socialist ideologies.  Why else would Greta Thunberg and friends be so reluctant to criticise the world's biggest polluter - China?  It's almost as if communist CO2 is an acceptable evil in their parallel quest of overthrowing the capitalist West.
The green agenda is the new media-driven left-wing cult that follows on from Black Lives Matter.  Anyone who refuses to follow the new narrative is ostracised and tarred with names like 'denier' or even 'far right'.  Patrick Harvie of the pro-independence Scottish Greens recently labelled such people 'hard right'.
For decades it has been said that the success of an independent Scotland would hinge on its access to North Sea oil.  No more.  Nicola Sturgeon recently declared her support for the anti-Cambo campaign in a crushing blow to an industry that has become synonymous with Scotland.  It appears that the green bug trumps jobs and economic prosperity.  Good luck winning IndyRef2 with policies like that.
One of the most prominent campaigners against the Cambo oil field is Lauren MacDonald.  Here she is pictured alongside Owen Jones at a rally earlier this week, during which Jones ranted about the implementation of the 'Green New Deal', a byword for socialist environmental policy. 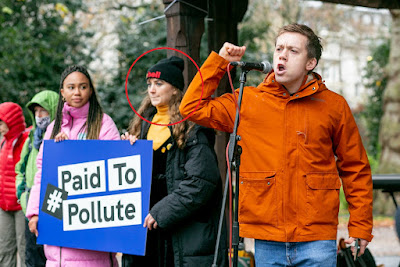 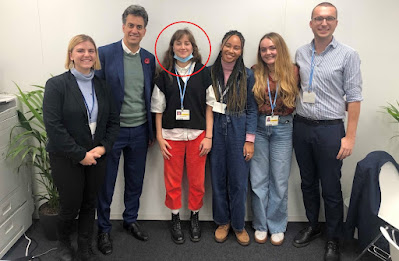 A cursory scroll through Lauren's Twitter feed reveals the kind of mindset behind the green revolution.  Last month she retweeted the details for an open borders march in Glasgow.  The tweet declared: "There is no climate justice without migrant justice".  Come again?  What has immigration got to do with the environment?  In any case, wouldn't a borderless world encourage more people to travel and therefore increase their carbon footprint?  Plus, if the green new deal is the global utopia these people envisage, why would anyone want to leave their country of origin in the first place?
In response to the recent jailing of several Insulate Britain protesters, Lauren tweeted the following.

Talk of abolishing prisons and police is a prime example that BLM, the far left and the green agenda are all sides of the same coin.
The footsoldiers of these tentative Marxist revolutions are overwhelmingly young university-educated middle class types like Lauren.  They have little in common with the proletariat, in fact all that they do in life is rooted in avoiding manual work.  It is why they will always fail, because they do not speak the language of the masses.
When news of the Shell pull-out from Cambo broke, Lauren tweeted a picture of herself giving a picture of Shell CEO Ben van Beurden the finger (see below). 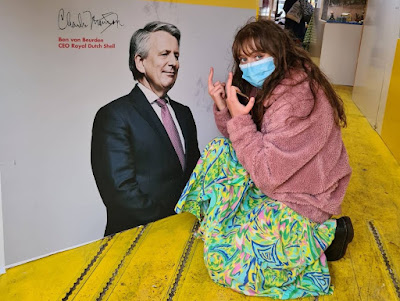 It was a puerile gesture that would inspire only puerile minds.  And these people want to be taken seriously?
Lauren's finger gesture follows her recent verbal assault on Mr van Beurden, after she somehow managed to share a stage with him.  She was invited to ask him a question, but instead went on a hysterical rant, accusing him of being 'one of the most evil people in the world'.  When she finally got around to asking him a question, she would not let him speak and resumed her rant before finally declaring that she would not 'share a platform' with van Beurden.  The Shell CEO was therefore summarily cancelled and 'no platformed' - a customary practice on university campuses for people who do not share Marxist ideology.  The footage can be seen here.
During her verbal onslaught, MacDonald deplored the 'death and suffering' that Shell was supposedly responsible for.  Well, dear, that is nothing compared the death and suffering at the hands of the communist ideology you follow.  You turn a blind eye to human rights abuses in China, to slave labour and massacres.  You and your ilk are in no position to lecture anybody about suffering.
at December 08, 2021