In the last two days a number of high profile banned Twitter accounts have been restored, culminating in the reinstatement of Donald Trump on Sunday morning.  Dr Jordan Peterson, Andrew Tate and the Babylon Bee are some of those whose accounts have been restored, but Musk was reticent to bring back Trump and instead delegated the decision to Twitter users by way of a poll.  A whopping 15 million voted and it was a win for the Donald...

Trump's account was swiftly restored following the poll, but he has not tweeted yet and maintains that he won't return to the platform.  With an election two years away it remains to be seen whether he will resist the temptation to broaden his audience and stay embedded in his Truth Social echo chamber.
Many of the returning accounts have enjoyed a boom in following, but none more so than Trump who - despite not being active on the platform - his account has amassed an extra 30 million followers since reappearing this morning.  At the time of writing his following stood at more than 83 million, compared to 36.4 million for Biden's personal account and 27.5 million for the presidential account. 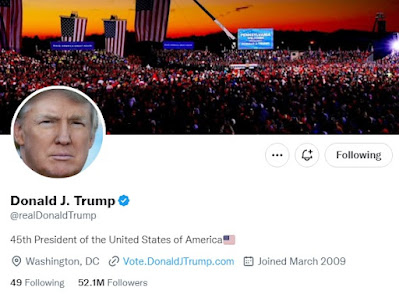 It is not clear who else Musk will be restoring to Twitter, but the list is endless and many names have trended as calls grow for more high profile conservatives and libertarians to be reinstated.  One conservative who will not be returning any time soon is Alex Jones.  Jones has been in the news a lot lately in relation to the colossal Sandy Hook lawsuit and left-wing journalists were keen to know if he would be one of those returning.  It was a negative from Musk, but Jones has been very gracious in response, posting a conciliatory video on Gab.
Perhaps Jones will be restored at some point in the future, so too the likes of David Icke, Dr Robert Malone and other Covid sceptics.  Either way, Musk is already moving in the right direction.
at November 20, 2022