Prolific tweeter Chris Bryant has been humiliated online yet again after the Labour MP sparked an argument built on sand.  The Rhondda MP was clearly upset about the presence of economist Kate Andrews on the BBC's Question Time and tagged the programme in a tweet complaining about her 'role' in the Institute of Economic Affairs (IEA).  Unfortunately for Chris, Andrews picked up the tweet the following morning and pointed out that she did not work for the IEA... 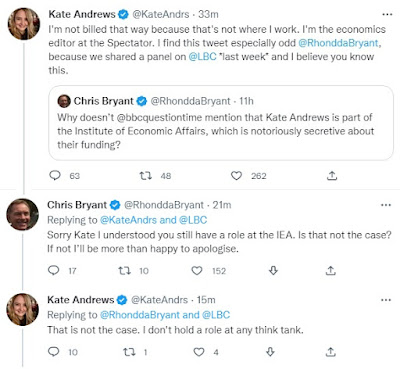 Kate has not worked for the IEA for three years and Bryant was quickly on his arse clutching at straws.  The best he could do was a screenshot dated 2016 that referred to Andrews to back up his non-existent argument.  She fired back minutes later and a more formal apology ensued. 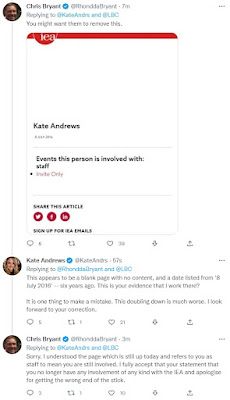 If Bryant had bothered to check he would have found that Andrews' past involvement with the IEA was referred to on Question Time's social media accounts, as seen here.
It's desperately embarrassing, but nothing new for a man who takes selfies in his underpants and posts them on gay dating sites.
Oh, and why was he so upset about Kate Andrews being on Question Time in the first place?  Because she repeatedly exposes the real reason behind the cost of living crisis.  And Chris Bryant - along with everyone else in the Parliamentary Labour Party - voted for it.
at November 18, 2022