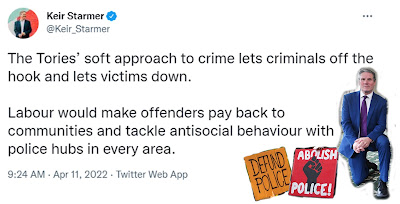 Ahead of the local elections next month Keir Starmer continues his desperate hunt for policies that will differentiate his party from the blue socialists in government.  On Monday he tried to position Labour as the party of law and order.  That in itself is laughable, but Starmer exposed himself to even greater ridicule by pledging to implement 'police hubs in every area'.
This is coming from a man who 'took the knee' two years ago in solidarity with an organisation that wants to abolish the police.  Dozens of his MPs also took the knee and some even defied lockdown rules in order to attend mass BLM demonstrations.  Those protests would later turn ugly, leading to attacks on the police and the desecration of historical monuments up and down the country from Bristol to Glasgow.
Many in the party excused the criminality.  Lord Adonis backed the mob in a series of tweets demanding that statues be taken down en masse.  Far left MP Nadia Whittome refused to condemn the rioters and tweeted that she 'celebrated acts of resistance'.
If Keir Starmer wants to convince people he leads a party of law and order it will take a monumental suspension of collective belief to forget this recent past...
at April 12, 2022