Anyone who thinks Labour's so-called moderates don't share the hard left's aversion to Britain and her history is sorely mistaken.  We've already seen Starmer and Rayner join their colleagues in kneeling in submission to the Black Lives Matter Brit-hating Marxists.  There doesn't appear to be a single Labour MP - moderate or otherwise - who has called out the violence and vandalism of BLM.  Some of them openly support it.  When the Colston statue was felled by the Bristol mob, Nottingham East MP Nadia Whittome tweeted: "I celebrate these acts of resistance.  We need a movement that will tear down systemic racism and the slave owner statues that symbolise it.  And we need to win a government that will always be on the side of this movement".

Now of course Whittome is one of Corbyn's 2019 hard left intake, but the statue-topplers can find an equally enthusiastic supporter in Blairite peer Lord Adonis.  Adonis has taken a break from his constant remoaning (he still thinks he can stop Brexit) and has gone on a crusade to have all colonial statues removed: "Just remove them all" he said in a tweet earlier this month. 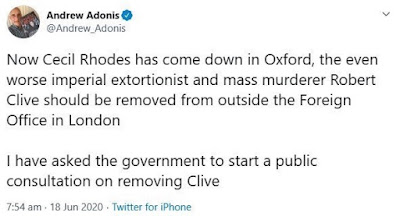 NOTE:  The Rhodes statue has not come down yet, but Oriel College did cave in to the mob last week and agreed to remove it pending planning permission. 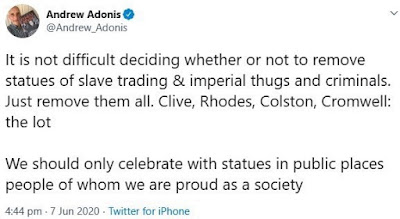 Tory MP Lee Anderson directly addressed Adonis's call for Cromwell to fall: "I walk past the Cromwell statue every single day to work and he is a daily reminder to me of our history, good and bad.  I would strongly suggest he stays there and that it should be Lord Adonis who is removed from the House of Lords and put in a museum".