SNEER THEM ON THE BEACHES

The sneering of the middle class left has reached fever pitch in recent weeks.  After the mob of predominantly white latte lefties toppled the Colston statue they followed it up by dumping a paper mache sculpture of a white working class bloke next to the empty plinth.  Naturally, their interpretation of an English working class male was a shaven-headed, braindead xenophobe.  The irony of their own prejudices was lost on them.

While they assume a moral and intellectual superiority over the rest of us they are not sharp enough to see the self-defeating culmination of their own arrogance.  From 2015 they backed a privately educated metropolitan multi-millionaire to deliver their twisted ideology, but were dumbfounded when the working classes said 'no thanks' on December 12.  They were the only ones who didn't see it coming and yet they continue to sneer and mock and repeat the same mistakes even now.

This is how the editor of the hard left Canary news website responded to scenes of packed British beaches in the recent heatwave... 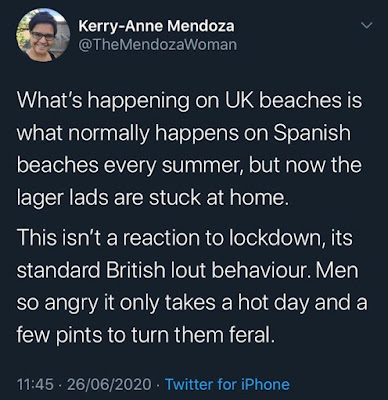 How ironic that the all-powerful proletariat continues to be held in so much contempt by the disciples of Marx?  Keep up the sneering Kerry-Anne and co, your movement will go far.  Not.
at June 27, 2020