Hate is stronger than ever on the left and cancel culture is set to target anyone who doesn't 'take the knee'.  When Dominic Raab said he wouldn't be taking the knee, Labour politicians were quick to denounce him and the mainstream media followed suit.  Then there was the usual outpouring of bile on social media.  One particularly vile comment came from a Twitter user by the name of Tongai Dodo who suggested that Raab's wife should be gang raped.

Dodo followed this up with a further tweet saying Mrs Raab should be raped 'on one knee'.

According to Dodo's Facebook page he is originally from Dublin, but now lives in Chelmsford.  On his Twitter profile he calls himself a 'black panther' and 'African revolutionist'.  Worryingly, his Twitter profile also states that he is a football coach at Galleywood Youth Football Club.  After his tweets were brought to their attention, the club released a number of urgent statements, saying that Dodo is no longer affiliated with the club. 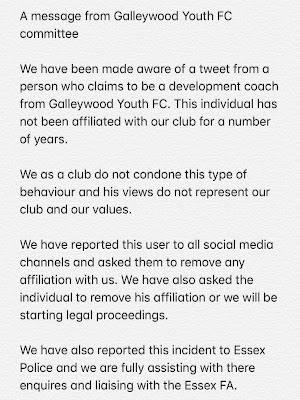 Galleywood Youth also confirmed they had reported Dodo to Essex Police and directly addressed him on Twitter, saying if he didn't remove the club's name from his profile they would take legal action.  Dodo has since removed the reference, deleted the tweets, changed his Twitter name and locked down his account.

Looks like the left have cancelled themselves in this instance.