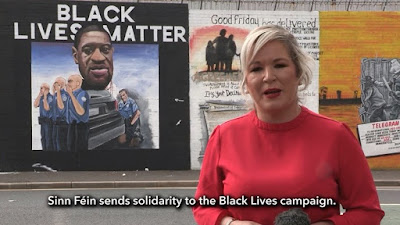 Sinn Fein's Michelle O'Neill has released a sickening video in which she fawns over a republican mural in honour of George Floyd.  The mural depicts the murder of George Floyd, including three police officers standing by in a 'three wise monkeys' pose.  It should come as no surprise to see Marxist Sinn Fein jumping on the Black Lives Matter bandwagon.  The BLM movement has become synonymous with the political hard left, who see it as a vehicle to destabilise Western democratic society.  Labour, the SNP and Plaid Cymru have also expressed support for the movement this week.

The Sinn Fein video also features Paul Maskey, the 'MP' for Belfast West.  He reels off a brief history of republican contribution to hard left causes around the world - including the communist International Brigades in the Spanish Civil War and Marxist sponsorship of the anti-apartheid movement in South Africa.  Black Lives Matter is seen as a continuation of the Marxist cause.  Incidentally, the same leftists who opposed apartheid say nothing about the wave of violence against white South Africans since apartheid ended.


Since the mural was unveiled critics have pointed out that some of the IRA's victims during the Troubles were black.  At least three black members of the British Army were murdered by the IRA.  Eustace Handley and Errol Gordon were murdered in separate IRA attacks in 1972, while Paul Garrett was shot dead by an IRA sniper in 1993.

There is also a question arising from the depiction of the three officers standing on the left hand side of Sinn Fein's BLM mural.  These are meant to represent the three officers who stood by while the white officer knelt on George Floyd's neck.  The somewhat ambiguous ethnic depiction is intended to suggest that all three were white, but in reality only one of them was white (see mugshots below).

Yet another example of the left twisting the truth in order to make the crime appear as racially provocative as possible.  Where the left is involved in Black Lives Matter remember that division is their game, destruction is the aim.
at June 06, 2020