Keir Starmer has written to the PM with a series of questions relating to what he refers to as 'peaceful protests' in the United States.  The letter echoes the sentiment shown by Emily Thornberry in her letter to the International Trade Secretary a few days ago.  Both letters are intended to paint President Trump as some kind of despot who is attacking innocent protesters.  One wonders if any similar letters have been sent out by Labour frontbenchers in recent years urging the government to condemn actual despots around the world. 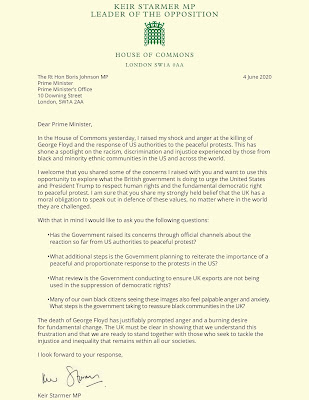 Anyone with half a brain can see that the images emerging from US cities show that what has been happening is far from 'peaceful'.  And what are these 'human rights' supposedly under 'attack' Sir Keir?  The right to loot, burn, vandalise and assault people?  The President is not responsible for the wave of anarchy.  Who is setting fires and looting businesses?  Not the police.

Of the sixteen people killed in the riots only three are known to have been killed by security forces.  Most of the deaths have arisen from confrontations over looting, including the despicable murder of David Dorn, but this is not the narrative favoured by UK Labour politicians and the anti-Trump media.  Incidentally, the only death that involved the National Guard occurred in a state (Kentucky) governed by the Democrats.  Another convenient fact ignored by Thornberry and Starmer is that the army were called in by several other Democrat governors too (including the ultra-left heartland of California).  This just doesn't fit their anti-Trump agenda.
at June 04, 2020