BEAST OF HIS OWN MAKING

The problem with unleashing a mob is you can lose control of it very quickly.  It may not have yet dawned on many politicians in their ivory towers, but the consequences are beginning to unsettle a few of the mob cheerleaders.  Brits awoke today to news that both the Cenotaph and the Churchill statue have disappeared from view, concealed behind ugly grey shutters for their own protection.  This didn't appear to concern many on the left, but has understandably created outrage elsewhere with words like 'surrender' and 'capitulation' being used.  Meanwhile, one of those who has been encouraging the mob publicly expressed his concern yesterday over the wave of censorship currently being deployed by broadcasters.  TV shows such as Little Britain, The League of Gentleman and Bo'Selecta have been deleted from streaming services over the alleged use of 'blackface', but Little Owen is concerned that the removal of a Fawlty Towers episode is a step too far... 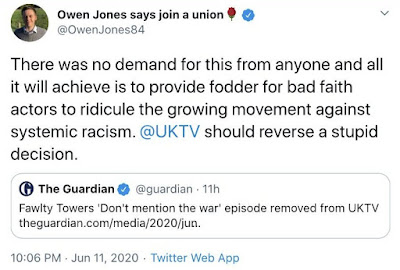 Unfortunately Owen, once you've unleashed the beast you can't pick and choose its victims.  Suck it up snowflake, there's much worse to come and if you thought the chaos was going to somehow benefit Labour - you're sorely mistaken.
at June 12, 2020