One of the most vociferous MPs calling for the head of Dominic Cummings last week was the SNP's Ian Blackford.  Opponents of the Remain plot to oust Cummings hit back at Blackford by highlighting one of his tweets from March 26.  He travelled more than 600 miles to his Skye home during lockdown, rather than stay in his London home.  There wasn't much media interest in the story (predictably), but if Blackford had faced questions he would have argued that the rules dictate he stays at his primary address.  However, he was already at his second home at the start of lockdown and given his own admission of the "prevalence of the virus in London" he should have actually stayed where he was.  It's not known exactly how he got to Skye, but there is no way in which he could have done it without potentially spreading the virus - whether it was via public transport, plane or by car (he would have had to stop at least twice for fuel). 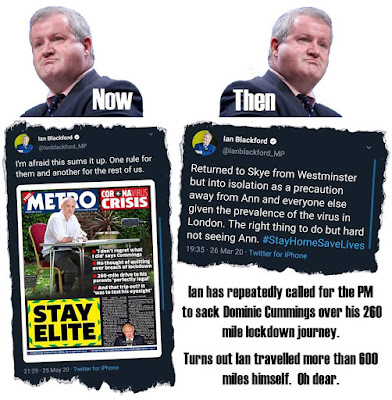