The mainstream media has chosen to ignore last night's rioting in London in favour of a 'debate' aimed at justifying the toppling of the Colston statue in Bristol.  Anyone who disagrees will be hounded and called the usual names, but no-one is justifying slavery.  What happened yesterday was mob rule and it has sinister implications going forward.  It immediately led to calls for other statues to be toppled and Bristolians will now see a concerted effort to erase the name Colston from Bristol altogether.  This is book-burning stuff.  The mob claim to speak for the majority and yet the most recent petition to remove the statue could muster only 11,000 signatures from a city of almost half a million.  It's not clear how many of those signatures were actually from local people, but clearly the statue is not as 'offensive' as the mob, their media backers and the local police chief made out.

Speaking of that police chief, you may have seen his interview yesterday in which he says his force "did the right thing" in standing off and allowing the statue felling to happen.  In a video that appeared online yesterday the same officer speaks to a protester about what happened.  It's an astonishing piece in which he makes numerous political statements and praises the "amazing conduct" of the Bristol protesters.  Remember that this is after the statue has been pulled down and dumped in the harbour.  Watch out for his wink at the very end, making it very clear whose side he is on.


While most people were expecting trouble to continue in London yesterday, events in Bristol surprised many.  However, this city of two universities has become entrenched in the hands of the left in recent years.  Ten years ago Bristol City Council was controlled by the Lib Dems who also held one of the four Parliamentary seats here.  One of the other seats was held by the Tories until the 2017 general election in which Labour won all four seats.  Labour has been in control of the council since 2016, the same year the party's candidate became the directly elected mayor.  It's that mayor - Marvin Rees - who has been doing the media rounds over the last two days justifying the toppling of the statue, calling it an 'historic moment'.

The City Council also did its bit to empower the mob on Sunday by tweeting the hashtag #BristolTakeTheKnee, an act of virtue signalling that Marvin Rees and all four Bristol Labour MPs were only too keen to engage in... 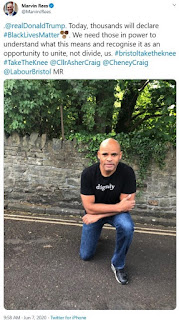 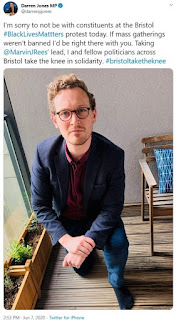 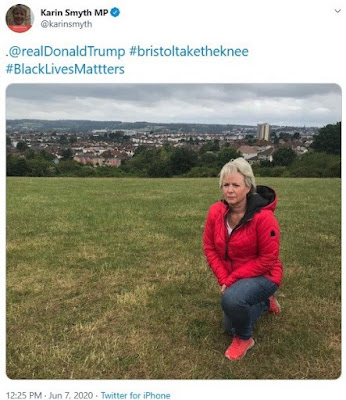 All this is based on the lie that black people are disproportionately killed by police officers.  It has nothing to do with black lives, this is political opportunism that will set back race relations years.  Division is their game, destruction is their aim.