The city of Bristol contains four Parliamentary constituencies, all of which returned a Labour candidate in 2017 - the first time it has done so since 2001. 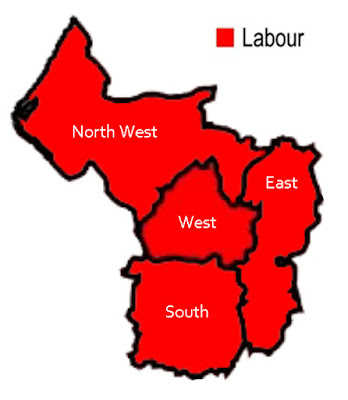 Bristol South and Bristol East have been held by Labour for decades, while Bristol North West is a marginal that has regularly changed hands between blue and red since its creation in 1950.  Bristol West has been held by all three main parties, but threw a curve ball in the 2017 election.  Having been recaptured by Labour in 2015 from the Lib Dems, the party inexplicably increased its majority from a mere 5,673 to more than 37,000 - the biggest swing to Labour in the entire country.  The result was totally unexpected and raised a few eyebrows.

Bristol City Council has been controlled by Labour for most of its history, except for two years of Lib Dem control (2009-2011) and several periods of no overall control.  After being punished by voters for their part in the coalition government, the Lib Dems have gradually fallen behind the Conservatives and the Greens.

Following a referendum in 2012, Bristol chose to elect its mayor.  A local campaigner won the first contest on behalf of 'Bristol 1st', beating Labour into second place.  Labour turned the tables in the second mayoral election and since 2016 the post has been held by Marvin Rees.

Bristol returned a big Remain vote in 2016 and does not have any Leave-voting seats.  All of its MPs are Remainers, two of whom ignored party whips to vote against the triggering of Article 50.  Only one of the four MPs was born in Bristol.  Jeremy Corbyn found no support among Bristol's Labour MPs during the leadership challenge of 2016 as they all backed Owen Smith.

Bristol East has been held by Labour since 1992

Incumbent:  Darren Jones (Lab), majority 4,761
Born:  Bristol, 1986
First elected:  2017
Leave/Remain:  Remain
Notes:  An ardent Remainer, following his surprise election in 2017 he stated that stopping Brexit was his number one priority.  Jones is also a solicitor and leads the Future Britain Group, a gathering of Labour moderates established by Tom Watson.

Bristol North West has been held by Labour since 2017, but has regularly changed hands between Labour and the Tories since its creation in 1950.

Bristol South has been held by Labour since 1935

Bristol West has been held by Labour since 2015, before which it was held by the Lib Dems from 2005

Note:  This is a Remain Alliance seat, where the Liberal Democrats have stood down in order to give the Green Party a free run.

Please support our work by donating what you can here
at November 28, 2019