Parliament has been dissolved and the gloves are off.  Dozens of MPs have either retired, bottled it or (in Labour's case) been purged.  One of those purged MPs is Kate Hoey.  She is the only Labour MP to have consistently voted in favour of Brexit (a clean break Brexit) in every single Parliamentary vote.  While many Leave voters rage about MPs going against their Leave voting constituencies, Kate Hoey actually went against a 78% Remain vote in her Vauxhall seat.  Steadfast in her lifelong Eurosceptic views, her refusal to adopt a London Labour Remain attitude put her at odds with her constituency party.  They pulled out the stops to ensure she would not be re-selected as Labour's candidate and rather than fight a losing battle, at the age of 73 Kate threw in the towel.  There was a suggestion that she may stand for the Brexit Party in the forthcoming election, but that now appears unlikely.  She referred to her troublesome local activists in her emotional farewell speech (see below).


Kate Hoey always stood apart from her comrades on the left.  While the overwhelming majority of Labour MPs hail from the metropolitan elite, Kate was an Ulster Protestant who was brought up on a farm.  This fact alone put her at odds with her fellow Marxists.  She was not ashamed to say she was British and that she didn't share their support for a united Ireland.  Despite this she managed to obtain the Labour ticket for the 1989 Vauxhall by-election following the resignation of the incumbent.  This was not without controversy as she was not the preferred candidate at local level and was foisted upon them by the National Executive Committee.  Her Labour opponent was the mother of Kate Osamor, the controversial Labour MP for Edmonton since 2015.

Despite the resentment over her appointment, Hoey went on to represent Vauxhall for an unbroken 30 year period, during which she more than doubled the Labour majority from less than 10,000 to more than 20,000 at the last election.

A keen athlete in her youth, Hoey later worked for several professional football clubs as an advisor.  She was Minister for Sport in the Blair government.  Over the years she moved away from the hard left and adopted a more libertarian ideology.  She rebelled against New Labour many times and opposed the war in Iraq, the introduction of ID cards and the smoking ban.  Her support for foxhunting also put her at odds with her metropolitan colleagues.  However, it was her Euroscepticism for which she will probably be most remembered.  She opposed both the Maastricht and Lisbon treaties and still believes that Britain will one day leave the European Union.

Farewell Kate Hoey, one of the decent ones. 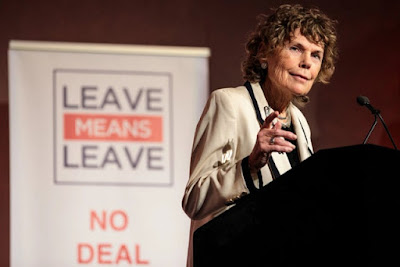