Another hilarious angle of Labour's (current) Brexit policy was exposed by Tom Swarbrick on LBC yesterday.  Speaking to Labour's Mike Buckley, Swarbrick managed to extract an admission that Labour's proposed new Brexit deal would basically be the same as staying in the EU.  Therefore, in the second referendum that Labour has pledged, the two options could potentially be a) Remain with our deal or b) Remain.  The fact that Remain was rejected in 2016 is anathema to Labour.

When we checked out Buckley's Twitter page, we found this.  He'll probably be blocking Tom Swarbrick as well after that interview. 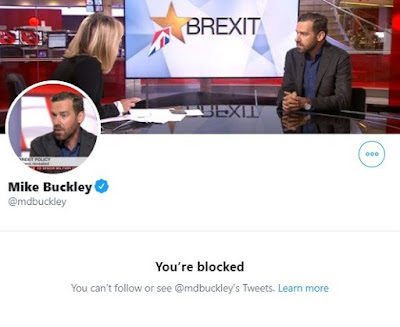