A supposed bastion of the hard left, Liverpool contains four Parliamentary constituencies inside its city boundaries.  A fifth seat - Garston and Halewood - overlaps with neighbouring Knowsley and consists of five Liverpool council wards and three Knowsley wards.  At the 2017 general election all five seats returned Labour MPs, but two of whom have since resigned from the party (Luciana Berger and Louise Ellman). 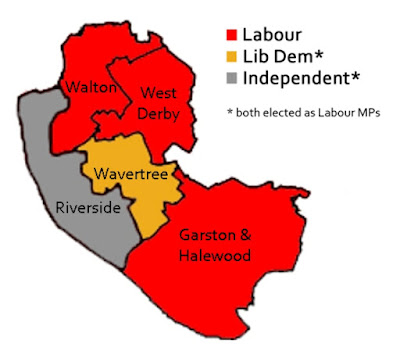 Liverpool has returned a solid slate of Labour MPs since the Labour landslide of 1997.  The last non-Labour MP elected here was the Liberal Democrat David Alton who held the seat of Liverpool Mossley Hill until its abolition in 1997.  All five MPs elected in 2017 had huge majorities and Liverpool Walton is regarded as the safest Labour seat in Britain.  However, of the five members elected in 2017 only two are defending their seats at the forthcoming election.  Two Jewish MPs (Berger and Ellman) were driven out of the party and Stephen Twigg has opted not to stand again.

The recent selection process to replace these MPs was marred by controversy.  Accusations of a stitch-up swirled as outsiders were installed on the ballot paper in favour of local candidates.  One of those in the running was a councillor all the way from Islington no less.  It wouldn't be the first time outsiders were chosen for the ultra safe seats of Liverpool, but this time the stitch-up was largely defeated.  It should be noted that only one of the five incumbents is a Scouser.  In a month's time this is highly likely to have risen to four out of five.

Although the Parliamentary return has been a solid red for more than two decades, contrary to popular opinion the city council has been less so.  The famed hard left have frequently lost control in Liverpool over the years.  Following the last Tory-led council of 1972 the council has actually spent more time out of Labour's control.  Intermittent periods of no overall control was followed by a stable period of Lib Dem control between 1998 and 2010.  Following the electoral backlash against Lib Dem involvement in the coalition government, Labour has asserted itself with an overwhelming majority.  This is currently the longest ever period of Labour control in Liverpool.

A secondary layer of local government here is the Liverpool City Region.  This combined authority also takes in the neighbouring local authorities of Halton, Knowsley, St Helens, Sefton and the Wirral.  The elected mayor is Labour's Joe Anderson, also the leader of Liverpool City Council.

Liverpool voted to Remain in 2016 and all its MPs are Remainers, including three hard Remainers who in 2017 voted against triggering Article 50 (Ellman, Berger and Eagle).  Despite the city's reputation, Jeremy Corbyn found little support among its MPs during the 2016 leadership challenge, four out of five of whom backed Owen Smith.

Incumbent:  Louise Ellman (Ind), majority 35,947
Born:  Manchester, 1945
First elected:  1997, as a Labour MP
Leave/Remain:  Remain, voted against triggering Article 50
Notes:  Ellman is Jewish and quit Labour in October 2019 in protest at Labour anti-Semitism and Jeremy Corbyn's leadership.  This followed multiple attempts to have her deselected.  She became Dame Louise Ellman in 2018.  In the 2016 leadership challenge she endorsed Owen Smith.  Ellman is not standing in the forthcoming election.

Riverside was held by Labour since its creation in 1983

Walton has been held by Labour since 1964.  After the last general election it is the safest Labour seat in Britain.

Note:  UKIP came second here with 9% of the vote in 2015, so the absence of a Brexit Party candidate is rather inexplicable.

Incumbent:  Luciana Berger (Lib Dem), majority 29,466
Born:  London, 1981
First elected:  2010, as a Labour MP
Leave/Remain:  Remain, voted against triggering Article 50
Notes:  Berger is Jewish and quit Labour in February 2019 alongside six other MPs to form Change UK.  She later switched to the Liberal Democrats, but will not defend her seat at the next election.  Instead, she will be contesting the London seat of Finchley & Golders Green.  Berger was privately educated.  In the 2016 leadership challenge she endorsed Owen Smith.

Wavertree was held by Labour since its creation in 1997

Incumbent:  Stephen Twigg (Lab), majority 32,908
Born:  London, 1966
First elected:  1997, for Enfield Southgate
Leave/Remain:  Remain, but voted to trigger Article 50
Notes:  Twigg rose to fame when he unseated cabinet minister Michael Portillo in 1997.  The Tories retook the seat in 2005 and Twigg was out of Parliament until 2010 when he was selected for the safe Labour seat of Liverpool West Derby.  Served on the front benches in both government and opposition, but is not standing this time.  Endorsed Owen Smith in the 2016 leadership challenge.
Scandals:  Drunk and incapable

West Derby has been held by Labour since 1964

Garston & Halewood has been held by Labour since its creation in 2010.  It largely follows the boundaries of the previous seat of Liverpool Halewood which was held by Labour between 1983-2010.  The new seat absorbed three council wards from neighbouring Knowsley.

Please support our work by donating what you can here
at November 21, 2019