Despite Labour showing a slight recovery in opinion polls this week, a major YouGov analysis released last night suggests a comfortable 68 seat majority for the Conservatives.  The seat-by-seat analysis suggests the Tories will make most of their gains in the north of England.  There would be no seats for the Brexit Party and little advance for the Lib Dems.  Only the SNP would add any significant number of seats to their current tally. 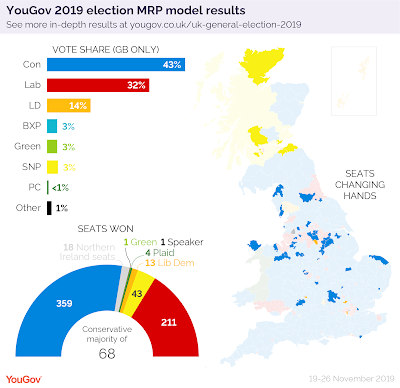 Of course all opinion polls should be treated with great caution, as the only one that truly matters will be taken on December 12th, but it should be noted that the 'MRP model' deployed by YouGov was the only poll that correctly predicted a hung Parliament in 2017.  The seat by seat predictions can be accessed via the YouGov site here.
at November 28, 2019