A TALE OF TWO LEAFLETS

There are currently two almost identical leaflets being distributed in the Cheshire seat of Altrincham & Sale West.  One from Labour claims that they are the nearest challengers to the incumbent, while the other claims it is the Lib Dems who are closest.  So, who is correct? 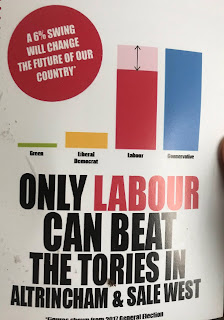 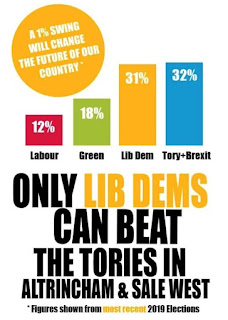 The Lib Dems are renowned for their use of dodgy bar charts and the Altrincham example is no exception.  While the Labour leaflet uses figures from the 2017 general election, the Lib Dem leaflet uses figures from the 2019 European elections.  This is disingenuous to say the least and they know it, having neglected to quote the source in full.  Instead they only refer to the "most recent 2019 elections" in the small print.

So why is this wrong, and why is it irrelevant?

People vote very differently in elections to the UK Parliament and the European Parliament.  If people voted the same way in both then we would have had a UKIP government elected in 2015 and we'd be looking at a Brexit Party majority next month.  European election results are simply no indicator of how people will vote in a general election.  While this is a strong Remain seat, electors overwhelmingly chose Leave-mandated parties in 2017 - both the Tories and Labour stood on pro-Leave manifestos.  Meanwhile, the Lib Dems and Greens came nowhere.