As the general election campaign kicked off in earnest it's fair to say it wasn't a great start for Boris Johnson.  However, just as Labour were beginning to smell blood, along came Tom Watson to throw a massive spanner in the works.  Billy Bunter never does anything without careful care and consideration about just how much damage it can do to his party leader.  By a massive 'coincidence' his friend and former Black Country colleague Ian Austin declared war on Jeremy Corbyn the following morning in a blaze of publicity and wave of media interviews.  He appeared later in the day with another former Labour MP, John Woodcock, as they launched their Mainstream anti-extremism group (see below).  A bad day was made infinitely worse by the Jewish Chronicle publishing its forthcoming front page a day early to call on British voters to reject Corbyn. 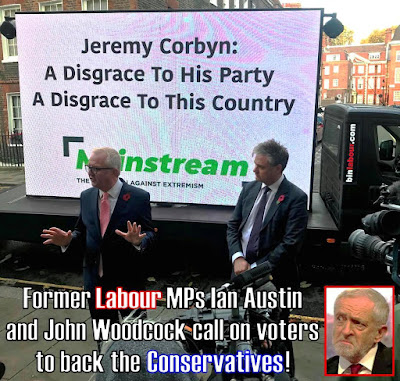