Last week the mainstream media continued its shameful descent.  The blatant hypocrisy of its BLM coverage was there for all to see in the outrage shown over the infamous Burnley banner.  Just two days earlier three white guys had been stabbed to death in a suspected Islamist attack in Reading and yet the media afforded more coverage to the banner than they did to those murder victims.  If you type 'Burnley banner' into the Google news search engine you get back almost 4.2 million results.  Type in 'Reading stabbing attack' and you get just 1.5 million.  It's almost as if white lives don't matter in the eyes of the media. 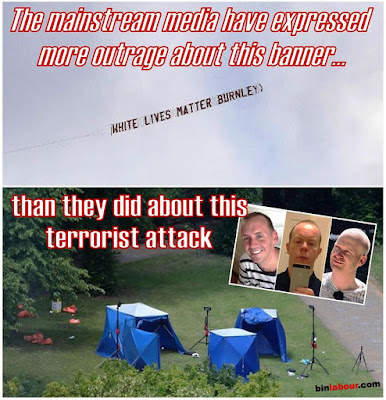