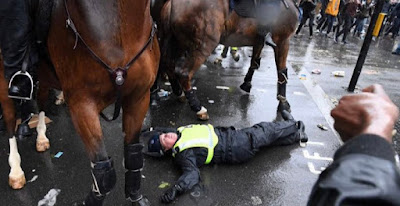 The disgraceful scenes in Whitehall last night should have been universally condemned, without hesitation.  However, far from condemning the violence, many on the left not only justified it, but took great delight in seeing police officers getting hurt.  The Guardian's Owen Jones looked to shift blame onto the police and demanded that horses be banned from future protests.  He did not condemn or even refer to the missiles that were hurled at both police officers and their horses.  He did not discuss why the horses were deployed in the first place - to drive rioters away from colleagues on foot who were being pelted relentlessly.

A few minutes earlier Owen had retweeted Brexiteer Darren Grimes to point out that he had incorrectly claimed that an officer who fell from her horse had been knocked off by protesters.  "A straightforward lie" was how Owen put it.  It's not quite as simple as that.  As you can see from the video below, the officer does indeed strike a traffic light, but the horse was bolting at the time.  The horse is clearly running ahead of the rest of the police line in panic, as missiles continue to rain down.

It was on this tweet that one of Owen's colleagues - Hannah Jane Parkinson - makes the following comment/request regarding the video footage.

While many reacted angrily to her callous remark, it didn't take long for someone to accept her challenge.  The resulting video edit was met with gratitude from Parkinson who said it was 'perfection'. 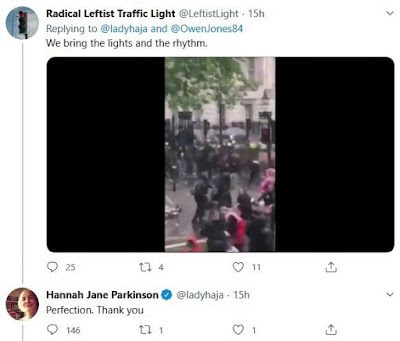 Another video edit to the same pop song was also met with a thank you from Parkinson, but other users piled in with criticism.  One user pointed out that while they were unhappy with the use of horses, what Parkinson was finding great delight in was "not a movie".  She defends her position be saying she wasn't gloating and that she hoped the officer was OK.  This is clearly not the message she conveyed in her initial comment and doubles down by describing the re-edit as 'funny'.  Her assumption that the officer is OK was ridiculed by another user who points out that Parkinson doesn't know that she is OK.  We now know that the female officer (not a guy as Parkinson describes) suffered a collapsed lung, broken collarbone and broken ribs.  Hilarious eh, Hannah? 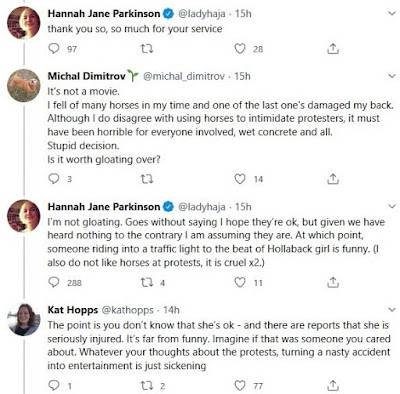 Parkinson, probably at the behest of her employers, issued an 'apology' of sorts on Sunday morning.  However, it wasn't so much an apology as a justification and highly disingenuous given she published it on Twitter with the tagline: "I can't believe I'm doing a notes app apology like I'm Justin Bieber".

Welcome to the hateful world of left-wing journalism.
at June 07, 2020