Two days after a Libyan asylum seeker slaughtered three people in a park, this was the disgraceful tweet put out by Labour MP Nadia Whittome on Monday night. 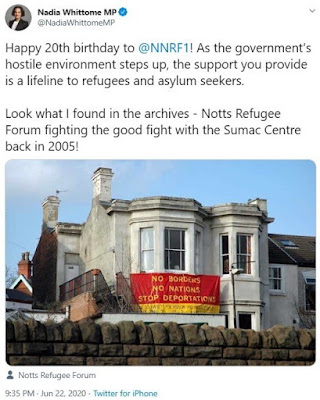 Just look at the picture she dug up to illustrate what she calls "fighting the good fight".  The banner reads: "NO BORDERS - NO NATIONS - STOP DEPORTATIONS".  While the timing of the anniversary of the Notts Refugee Forum was unavoidable, her choice of words and imagery was not.  Needless to say, Whittome was one of the many hard left Labour MPs who has failed to utter a single reference to the Reading attack.  Instead she'd rather let it be known that she wants to abolish our borders altogether and allow more people like the Reading terrorist to come and live among us.  What's more, if her beloved BLM get their way - there won't be any police to come to our rescue.
at June 23, 2020