Naz Shah has been criticised over her contribution to the school meal vouchers debate.  Last week she gave the Commons a sob story from her childhood in an attempt to educate Tory MPs as to the reality of childhood poverty.  Her example?  She bemoaned the absolutely 'harrowing' experience of having to go away to Scarborough for a summer holiday with social services.  She told how she had to go birdwatching in the cold and had to stay in a dormitory: "That is what poverty is" she told the bemused MPs opposite.  Really?  Because people who live in actual poverty would seize upon the luxury of a summer holiday.

No-one's denying that Naz had a troubled upbringing.  She was raised by a single mother who ended up in prison after murdering her abusive partner.  She could have raised those issues, but instead not only insulted and belittled a Yorkshire town, she insulted every citizen of the world who lives in real poverty.  Has she never seen those TV ads in which viewers are asked to donate £3 to give a child in Africa clean water?  Poverty in the West, particularly in generous welfare states such as ours, is about as catastrophic as all that 'institutional racism' we keep hearing about.

Meanwhile, the Tory MP for Scarborough hit back at Shah, telling the Yorkshire Post: "Many of my friends never went on holiday.  Naz is complaining she had a council funded week in Scarborough.  Many of her constituents from Bradford love to come to Scarborough year after year.  It’s a shame that this wasn’t good enough for her". 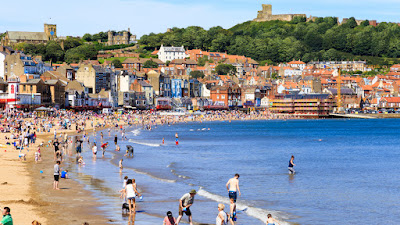