Last week was huge for BTLP and a couple of important milestones were reached on social media.  On Facebook we surpassed 100,000 likes and added around 2,000 new followers in the space of a week.  This was the biggest advance since October last year.  On Twitter, after much perseverance (and thousands of tweets) from Richey, the account finally surpassed 1,000 followers and continues to grow daily.  Karl worked hard on memes last week and also compiled more videos for the YouTube channel than he had for the previous two weeks combined.  Some of his efforts on Facebook were shared thousands of times, but it was the following Khan meme that gained the most traction. 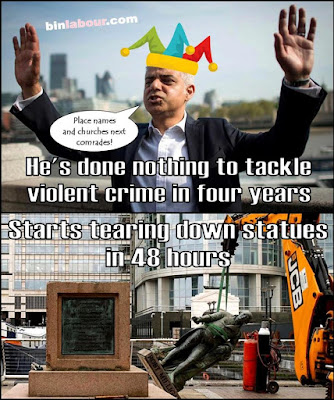 This was shared 8,916 times via Facebook and clearly struck a chord with people angry about Khan's capitulation to Black Lives Matter and the hard left ideology that drives them.  Whether we will see the violence and desecration fizzle out now is not clear, but there was a marked decrease yesterday with London fairly quiet and just some minor clashes reported in Glasgow.  The Antifa element will certainly want to keep the momentum going and the despicable mainstream media will be only too happy to oblige them with daily race-baiting and one-sided coverage.
at June 15, 2020