We can all agree that slavery is bad.  Anyone who lives in a civilised society would and should condemn slavery.  However, if we live in a truly civilised society then we should all condemn the actions of a criminal mob who tear down statues and deface monuments because they find them personally objectionable.  If we allow it to happen just once without reproach then we can quickly find ourselves on a slippery slope to anarchy.

There have been no arrests over the toppling of the Colston statue in Bristol, despite the incident having been filmed and shown around the world.  Given the disgraceful attitude of Avon and Somerset Police at the time this is perhaps no great surprise.  On Monday a new monument appeared a few metres away from the empty Colston plinth.  Perched on a wheelie bin was a clay sculpture of a bald overweight man in a string vest holding a mobile phone with a Cross of St George on it and a caption reading: England for the English.

The following pictures were shared on Twitter by Caleb Sivyer, who claims to be a senior lecturer at Bristol's University of the West of England.  He referred to the sculpture as a 'fantastic new statue'. 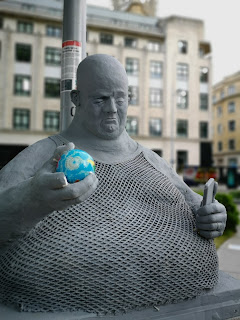 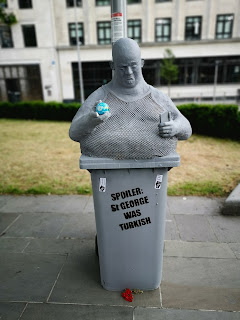 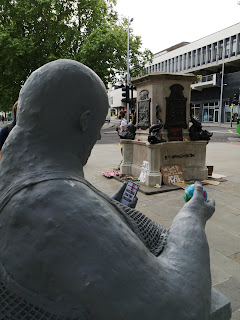 This is how the middle class left mock the working classes of this country and they're not even ashamed of it.  They do so from an apparently morally and intellectually superior mindset and yet these are the same people who continue to make the same mistakes over and over again, expecting a different result.  They were shocked and dismayed when Leave won the 2016 referendum and spent the next few years sneering at Brexit voters.  Leave voters quietly waited for the government to implement their democratic mandate, while Remainers marched in the streets and demanded that those stupid people should have their vote overturned.

They were dismayed when the Brexit Party romped home in the European elections, but they were not deterred from their sneering ways.  When Jeremy Corbyn got smashed in the general election a few months later they were devastated, not least because the working classes had backed a Tory government like never before.  How did this happen?  They were so puzzled and angry.

Yet still they sneer and mock the backbone of this country.  We can only hope they keep it up and continue in their eternally futile expectation that they will get a different result next time.

PS. Caleb Sivyer also says on his Twitter profile that he is an academic researching 'gender theory'.  We can give you a shortcut pal - there are two.  And also, Saint George was Greek - not Turkish.
at June 15, 2020