NEITHER 'LEGITIMATE' OR 'PROTESTS' 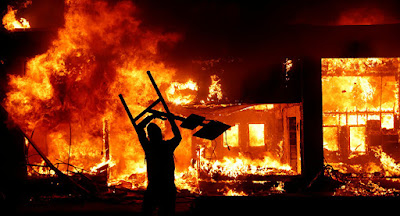 The disgraceful scenes coming out of the United States cannot accurately be described as 'protests'.  Yet that is exactly how the mainstream media is labelling widespread looting, arson and violence - including murder.  As of Wednesday at least 15 people are said to have died as a result of the riots, but the media is not reporting on the deaths as it does not fit their divisive narrative.  Only the abhorrent death of George Floyd seems to be worth reporting in the UK press.

Meanwhile, in the US the only riot deaths being reported by the national anti-Trump media are the deaths of two black males, one at the hands of police and the other from a bar owner defending his business.  The national media were not so quick to broadcast the murder of retired police chief David Dorn, also black, because he was killed by looters.  On Tuesday actors, celebrities, sports stars and musicians joined together to declare that black lives matter.  Yes, they do.  In fact at the moment they appear to matter more than anyone else's, that is as long as they can be exploited by the media.  Sorry David Dorn, you just don't fit the bill.  The US media is disgracefully stirring the pot, criticising every Republican move and reinforcing a narrative of it's 'them against you'.

On Tuesday the National Guard were deployed to protect historical sites in Washington DC, drawing condemnation from some sections of the press.  Days earlier the same sites were left covered in graffiti and given a free reign there's no doubt the 'protesters' would torch them as well.  The situation is so dire that National Guard troops have been deployed in as many Democrat-controlled states as Republican states - including the notoriously left-leaning state of California - a statistic largely overlooked as it doesn't fit the anti-Trump media agenda.  The manipulation of events leaves the mainstream media no better than the hard left Antifa thugs who have been responsible for so much of the violence.

Here in the UK our own hard left have been busy ratcheting up the tension in the hope of igniting trouble on our own streets.  We reported only the other day on a misleading tweet that is being used to stoke up anger.  In the last couple of days the Labour left have also mobilised online to exploit what is essentially the death of a black man 4,000 miles away in another country.  The murder of George Floyd has nothing to do with British police or the British state, but many in the Labour Party are desperate to join dots that aren't there and potentially put lives and property at risk here.

On Tuesday night frontbencher Emily Thornberry published a letter she'd sent to her government counterpart, Liz Truss, demanding that the UK cease exporting 'riot-control equipment' to the US.  The letter is astonishing in its deceitful interpretation of what is happening on the ground in US cities.  Thornberry suggests that the only party guilty of violence is Donald Trump himself, who she claims is "gearing up to use the military to crush legitimate protests".  As we've already established, many Democrat-run states have called in the National Guard too, so the military deployment is hardly something that can be laid entirely at the feet of President Trump.  As for referring to widespread looting, arson, death and destruction as 'legitimate protest', this is both laughable and disturbing in equal measure.  By Emily's own admission, the gear being supplied to the US is intended for 'riot control' and that is exactly what it is being used for.  What is happening is neither 'legitimate' or a 'protest' - it is sheer unadulterated criminality otherwise known as rioting. 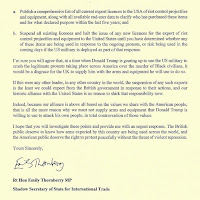 On Tuesday Jeremy Corbyn piled in with a couple of tweets and an article in the left-leaning 'i' newspaper.  "It is shameful the UK government won't condemn Trump" he declared in a tweet on Tuesday morning.  Well what exactly is it that Trump did that led to the death of George Floyd?  For starters his murder took place in a city controlled by Democrats - in a state also controlled by Democrats.  This is another fact conveniently ignored by the mainstream media.  Corbyn's newspaper article expands further on his tweet as he explains that it's actually President Trump's recent comments that deserve condemnation.

Corbyn singles out Trump's use of the phrase "when the looting starts, the shooting starts".  It's probably not the most helpful language in the circumstances, but he wasn't wrong in his assessment.  Most of the riot deaths have come from shooting confrontations between looters and business owners.  This would have happened regardless of what Trump said.  Corbyn also complains that Trump had "disgracefully compared protesters to terrorists".  The President actually referred to 'Antifa' as terrorists and he was absolutely right to do so.  It has already been proven beyond reasonable doubt that the hard left have orchestrated much of the violence, including many of the arson attacks.  This is domestic terrorism, plain and simple.  The evidence is all over social media for the world to see, but of course the mainstream media looks the other way.

Of course it's only natural for Corbyn to come out on the side of Antifa.  They epitomise the insidious nature of the hard left, a vitriolic hatred of their own country so strong that they want nothing less than its total destruction and humiliation.  Just look at some of the places targeted in the US violence - war memorials daubed in graffiti and a church set on fire opposite the White House.  The irony in attacking a memorial dedicated to people who fought actual fascists is lost on these thugs.  For them it is merely another symbol of the civilised America they want to destroy.  Several videos of US flags being burned by rioters have also been shared on social media.


Antifa thugs have been brainwashed into thinking that they live in some kind of white supremacist state and black people desperately need their help.  The reality is that this mindless death and destruction in the name of anti-racism is actually undermining and setting back race relations years.  The left are not fighting racism, they are fomenting it.  Just look at the tactics being used by the left here to whip up young British blacks into a similar frenzy.  Corbyn writes that in the UK black people are "unjustly affected by violence, racism and discrimination".  He then proceeds to write several paragraphs to hammer home his point before ending his article by saying: "Silence should not and can never be an option".  How is that last message meant to be interpreted by a young black person who has just been told how supposedly oppressed they are?  It's a thinly veiled incitement to violence and Corbyn knows exactly what he is doing.  The fact that it was printed in a national newspaper shows how equally culpable the media have been in stoking the flames.

Those who dictate that we live in a racially oppressive state want to tear our communities apart, setting black against white.  These people, and the organisations that back their agenda, are not anti-racists - they are the racists.

On Wednesday 3 June a huge 'Black Lives Matter' rally was held in London in defiance of lockdown.  Labour MPs tweeting their support included Barry Gardiner who proudly announced he was ignoring social distancing to join the protest.  Shortly after 17:00 hrs a policeman was punched in the face by one of the protesters outside Downing Street.  As colleagues attempted to arrest the man responsible, the crowd began to hurl missiles.  Watch below.

At least two other separate attacks on police officers have been reported, one of which was shared online in the following clip.  Two officers were chased by troublemakers before an assailant kicks one of them to the ground as he is cheered on by the baying mob.

The Daily Mail reports that a police van came under attack just after 21:30 hrs.  Riot police were swiftly deployed.  At least two journalists are said to have been assaulted, including an Australian reporter who was attacked live on air on Wednesday morning by a man screaming 'Allahu Akbar'.  Images of protesters standing on the Cenotaph and swinging on the flagpoles have been widely condemned on social media.  It's not clear if any damage has been caused to the monument itself.

Of course it goes without saying that the violence has drawn nothing but silence from Labour MPs.  We can only hope that the left and their criminal stooges do not succeed in escalating this further in the coming days.
at June 03, 2020