Disgraced former Labour MP Fiona Onasanya has returned to the spotlight this week.  We haven't heard much from her since she released her awful book back in February, but she's now hit the headlines again thanks to a bizarre claim.  On Monday afternoon she addressed a tweet to the Kellogg's cereal manufacturers in which she refers to an email she sent regarding the use of certain cartoon characters in their cereals... 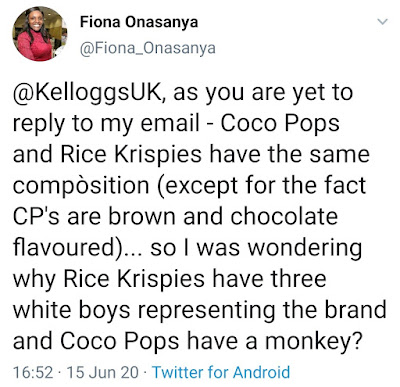 Even in the current climate of erasing old TV shows and tearing down statues, this is a bit of a stretch.  Onasanya predictably found herself subject to widespread ridicule as the tweet went viral and the story appeared in several national newspapers.  It was quickly pointed out to her that Kellogg's also produce a white chocolate version of Coco Pops, but the same mascot is used on the box.  Onasanya clearly hadn't done her research. 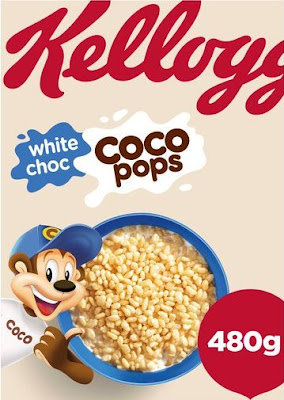 Kellogg's responded to the furore by saying it supported the black community and did not tolerate discrimination.  The spokesperson also added, possibly tongue in cheek:  "The monkey mascot that appears on both white and milk chocolate Coco Pops, was created in the 1980s to highlight the playful personality of the brand.  As part of our ambition to bring fun to the breakfast table, we have a range of characters that we show on our cereal boxes, including tigers, giraffes, crocodiles, elves and a narwhal".

Onasanya followed up her daft tweet with another two hours later in which she pointed out that Kellogg's founder (who died in 1943) was a white supremacist: "Well, given John Harvey Kellogg co-founded the Race Betterment Foundation (the Foundation's main purpose was to study the cause of and cure for 'race degeneracy'), it would be remiss of me not to ask...."

She appears to be suggesting that his company decided to honour his racist legacy with a monkey on a box 40 years later.  The mind boggles.

Earlier this month Onasanya released a YouTube video in which she expressed support for Black Lives Matter, albeit her message is somewhat more tactful than some of the provocative statements coming from the current crop of Labour MPs.  She begins her video by introducing herself as the former MP for Peterborough North.  It's not a great start seeing as there has never been a Parliamentary constituency by that name.  She was the MP for Peterborough.  She goes on to urge a peaceful campaign (admirable), but then reels off an absurd analogy about snakes in a bowl.  Onasanya appears to have an obsession with snakes, having named her book Snakes and Adders.  Aren't adders snakes?  Anyway, while the hand in the bowl analogy is well known, no-one ever suggested there were snakes in the bowl and even if there were, why would anyone put their hand in there in the first place?  Watch below, for a laugh if nothing else.