The curious case of the racist professor rumbles on.  Last week we reported on the anti-white tweets of Cambridge University lecturer Priyamvada Gopal and the even more outrageous response of her employers.  Not only secure in her job, but now promoted, Dr Gopal's sneering arrogance has exploded in recent days.  She has also been emboldened by not one, but two public statements from the Cambridgeshire police exonerating her of any offence.  In fact the local constabulary not only announced that Gopal was innocent, but that they would be investigating "all reports of racist and threatening abuse against her".  Astonishing.

Dr Gopal has taken to threatening legal action against people circulating a doctored tweet in which a Stalin quote is attributed to her.  She bizarrely threatened legal action against a bemused Darren Grimes on Monday morning, despite the fact he'd never shared or even referenced the fake tweet.  However, it soon transpired that there was an even more provocative tweet that was definitely not fake and at the time of writing is still there for all to see.  It dates from February 2019 (see Twitter thread below). 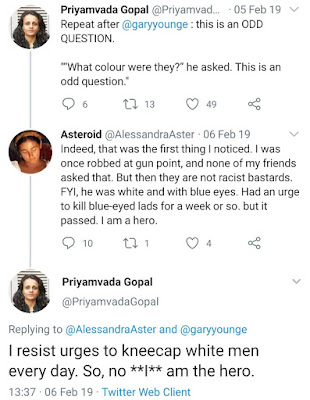 If the shoe was on the other foot and a white professor had tweeted this about black men they would be out of a job by the end of the day.  How has our society reached a position where those in powerful positions deem it acceptable to incite racial hatred as long as it's directed against white people?