Priti Patel's epic take down of Labour's race-baiting on Monday incensed Labour MPs, several of whom denounced her on Twitter within minutes of the Home Secretary's statement.  The odious Naz Shah has now written to Priti Patel repeating their complaints, in a letter co-signed by 34 other BAME Labour MPs (see below, click to enlarge). 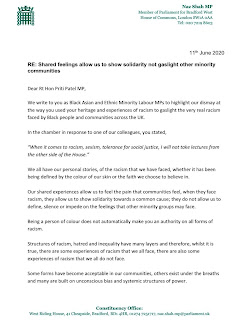 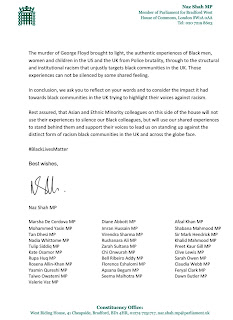 The hypocrisy on display here is staggering.  When Priti Patel spoke on Monday she was replying to a question from Labour's Florence Eshalomi in which the MP had used her identity as a black person to make a point about racism.  So why is it acceptable for Labour MPs to use their ethnic identity, but not Priti Patel?  Of course we know the answer.  As a Tory, Priti Patel's opinion does not count as she's not conforming to the left's idea of how a BAME person should behave.  Labour have for years assumed they own not just the BAME vote, but BAME opinion too.  Anyone from an ethnic minority who speaks out of line is trashed and excommunicated, even to the point that their ethnicity is denied.  We saw an example of this in the US recently where presidential candidate Joe Biden remarked in an interview that black people that didn't vote Democrat were not black.

Tragically for Labour (and the Democrats), black people have their own minds and are capable of choosing their own path independently of left-wing politicians.  If Labour want to continue down the path of claiming ownership of BAME people at some point someone is going to make comparisons with ownership of slaves.  Awkward!

As for Priti Patel, on receipt of Shah's letter she doubled down on her message of defiance. 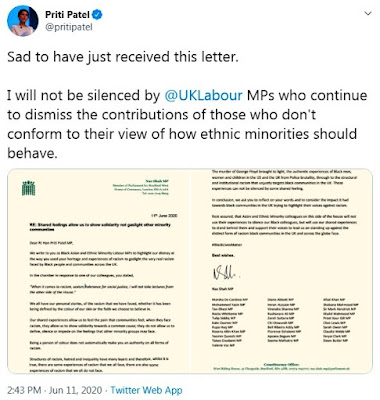