The chair of Watford Labour Party has suggested on Twitter that she would 'happily piss on Churchill's grave'.  Linda Meehan, who only became chair in January, has issued a half-hearted apology after members of her own party reported her.  Meehan was responding to a foul-mouthed tweet from an Irish user called Brian Flanagan who describes himself as an 'Irish Republican Marxist'.  Clearly a fan of Sinn Fein then.  Flanagan's tweet and Meehan's reply can be seen below.  She has since deleted her reply. 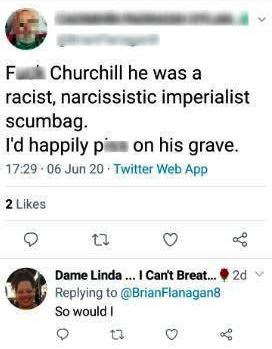 Brendan O'Brien, a member of Watford Labour told the Watford Observer: "I strongly support the removal of statues of slave traders and other historical figures that are offensive, they should have been taken down a long time ago.  However, as a member of Watford Labour Party, I want to disassociate myself from this crude tweet.  Churchill was a Conservative and he is known to have expressed opinions on race that were prejudiced and wrong.  I know how strongly my own grandparents - miners and trade unionists - opposed Churchill politically, but in 1940 they readily supported him in order to defeat the vilest racism that had ever been seen.  This crass tweet can only help the far right and sow division".

The tweet Meehan was responding to wasn't open to misinterpretation, it was very blunt and to the point, so it's pretty clear what her thoughts are of our wartime leader.  However, in her outlandish apology she claimed that she was not 'endorsing' Flanagan's tweet and even suggested that she actually disagreed with his course of action: "I apologise for any offence caused.  The tweet is in no way endorsing what the gentleman said.  It was perhaps bluntly put that I understand his perspective but I disagree totally with the way he wanted to handle it.  That is wrong.  I apologise for coming across as rude or in any disrespectful to our members, but one has to understand the current climate we are in which I suppose is a negative environment for people of colour.  I should have elaborated.  I am happy to delete the tweet if it has caused offence.  I am not here to offend, I am here to educate".

It has become tangible recently that anyone who expresses an opinion contrary to the hard left needs to be 'educated'.  This is the same sneering tone with which remoaners have persistently scolded Leave voters for the last four years.  It backfired on them spectacularly time and time again at the ballot box and yet strangely they kept on singing the same condescending tune.  The truth is that when hard leftists like Meehan talk about the need to educate, what they actually mean is 're-educate' in the Marxist doctrine.

As for her remark about the current climate being 'negative' for black people.  Even if that were more true than it was a few weeks ago, who is to blame?  Who has tried to exploit the death of a black man 4,000 miles away and and twist it into a narrative that suggests this country is some kind of racist Hellhole?  In doing so who sowed the hatred and division we have seen in the last two weeks?  The Black Lives Matter movement has put back race relations years and Labour politicians like Meehan are only too happy to engage in it and watch the hate flow.

Despite her 'apology' Meehan has re-affirmed her hatred of Churchill by explaining that she does indeed want his statue removed: "I wouldn’t say Churchill is a good man because he did one good deed.  He did save a lot of lives in the actions during the war, but equally he did other things that were very unpleasant.  I back the removal of the statue of Churchill and to put it into a museum.  I don’t think it should be thrown into a river".

Well you say that now Linda, having been found out, but it seems very clear from the point of view expressed in your tweet that you would be applauding the mob if they were to topple his statue.  For more of Linda's disgusting views you can find her Twitter profile here, but please note that she is not actually a 'dame' as she suggests in her title.  Ironically she also calls herself an 'equalities champion'.  You've got to laugh.