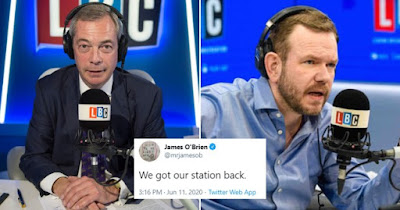 LBC Radio's James O'Brien turned his smug dial up to eleven when Nigel Farage was made surplus to requirements last week.  Farage doesn't want to discuss his 'amicable' departure from LBC Radio, but the fact that it happened in the same week that Farage spoke out about the Marxist reality of Black Lives Matter is perhaps too much of an amazing coincidence.  O'Brien greeted the news with a gloating tweet that read simply: "We got our station back".  Unfortunately for the supposedly never wrong presenter the tweet created such a wave of disgust that the controllers over at LBC's TalkRadio competitors must have been rubbing their hands with glee.

It's been speculated as to what O'Brien meant by his tweet, particularly as LBC retains prominent Brexiteers such as Iain Dale and Nick Ferrari.  However, O'Brien is not keen on discussing it and he deleted the tweet amid the backlash that followed.  Now some of his supporters are claiming that the tweet never existed in the first place and is a conspiracy.  The problem for them is that screen captures are so easy now (the above screencap appeared on the Metro newspaper website).

Ironically many of the same people crying 'conspiracy' to defend O'Brien were the same ones clamouring to support James in his assessment of the Google Churchill conspiracy.  On Sunday afternoon O'Brien sneered...

The photo was restored at around 11:12 in the morning, coincidentally after a huge backlash to the extent that the story appeared on several right-leaning news sites including The Sun and MailOnline.  Bear in mind that O'Brien didn't comment on this until almost three hours after Churchill's photo had been restored to the Google wiki frame.  O'Brien's supporters swiftly took to their Google search engines and posted screenshots to show Churchill's image back in its place and exclaiming that the whole story had been made up!

What's also quite interesting about O'Brien's tweet is his reference to "people with no discernible talent" and "far right lies".  Many people only became aware of the missing Churchill image because of one of O'Brien's own colleagues.  Late on Saturday night Maajid Nawaz tweeted his concern about the missing image and re-visited it in several tweets. 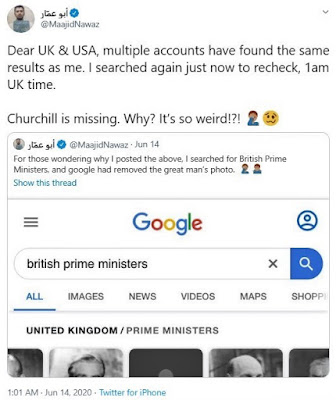 Was O'Brien directly addressing Nawaz as someone with 'no discernible talent'?  If so, that's a bit awkward.  Also, why is expressing concerns about the missing picture somehow 'far right'?  Nawaz himself can hardly be referred to as 'far right', not since he renounced Islamism and went on to represent the Liberal Democrats and fight racism equally on all sides - as it should be, James.  Instead of referring to Britain's greatest heroes as 'dead white supremacists' and legitimising attacks on living white people perhaps you could learn a thing or two from a man with 'no discernible talent'.
at June 15, 2020