FRONTBENCHER BACKS DOWN IN TRANS ROW

Hapless Labour frontbencher Lloyd Russell-Moyle has been forced into a grovelling apology after he lashed out at children's author JK Rowling over her views on 'trans rights'.  Rowling has spoken out several times about gender identity and recently published an essay in which she argued against allowing biological men access to female spaces.  She cited her own experiences of sexual abuse to highlight the potential dangers such a policy could lead to for biological women.

Critics of 'trans rights' like Rowling can expect a barrage of abuse and can fall victim to the left's cancel culture.  One of those victims was Maya Forstater who lost her job last year after criticising the notion of gender fluidity.  Former sports stars Sharron Davies and Martina Navratilova were hounded after they spoke out against allowing biological men to compete in women's sports.  Yesterday the Father Ted and IT Crowd writer Graham Linehan was permanently banned from Twitter for daring to suggest that 'men aren't women'.

Despite the rise of intolerant 'transfascists' it was JK Rowling who was guilty of 'hate' according to Labour's Russell-Moyle.  Writing in the left-wing Tribune magazine last week Russell-Moyle referred to JK Rowling's recent essay: "Recently, of course, we saw people like JK Rowling using her own sexual assault as justification for discriminating against a group of people who were not responsible for it.  Trans people are no more likely to be rapists; in fact, they are more likely to be victims of sexual assault themselves.  That’s why, despite JK Rowling’s hate towards them, hundreds of trans people wrote to complain to The Sun when it trivialised her domestic abuse on a recent front page".

Russell-Moyle's article pre-dated the sacking of his hard left frontbench colleague Rebecca Long-Bailey and had gone largely unnoticed until last night when it was exposed by MailOnline.  At 08:04 this morning Russell-Moyle tweeted the following apology. 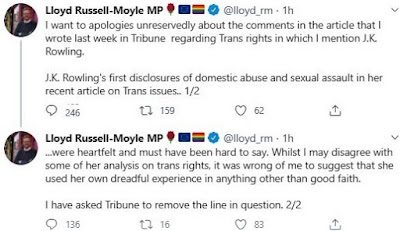 Russell-Moyle is not a senior frontbencher and is not taken very seriously in the PLP, so if he does get the boot it will not cause much of a stir in the party itself.  However, if Starmer does choose to get rid of his far left Shadow Minister for Natural Environment and Air Quality he will certainly incur the wrath of the transfascists.
at June 28, 2020