LABOUR NOT TRUSTED ON ECONOMY

YouGov released a new poll on Wednesday, but the results were mixed for Boris Johnson.  The public are apparently still wise to Labour on the economy, despite Starmer's attempt to shift the party from the hard left.  Asked on who they trusted to run the economy, those polled backed the Tory government almost two to one over Starmer's Labour (see below). 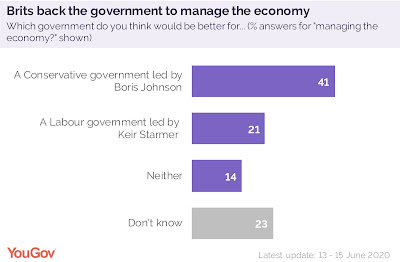 However, asked on which leader they saw as more competent, Starmer has overtaken Johnson.  The same poll two months ago had Johnson well in front of Starmer, as he had been with Jeremy Corbyn.  Corbyn never overtook a Tory PM in a competence poll, even at Theresa May's lowest ebb, so this latest poll will be of some concern to the Tories. 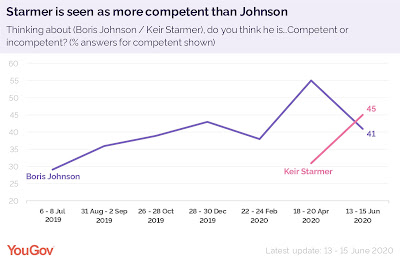 The latest election polling from YouGov shows Labour narrowing the Tory lead to eight points compared to the previous poll carried out at the end of May.  The poll was carried out a week ago (see below).