Tonia Antoniazzi was among dozens of Labour MPs who 'took the knee' earlier this week in a tribute to the murdered criminal George Floyd.  The Labour MP for Gower tweeted the above picture with the caption: "Proud to have joined my Labour MP sisters and brothers to #TakeTheKnee today as George Floyd is laid to rest.  We must fight injustice and racism everywhere".

It's curious that Antoniazzi has committed herself so enthusiastically to fighting racism, especially considering that back in January she put out two racially charged anti-white tweets on Brexit Day.  Using the racial slur 'gammon' she mocked Leave supporters as they celebrated in Parliament Square.  The tweets stayed up for three days before she deleted them, by which time they'd been screencapped and incorporated into this lovely meme... 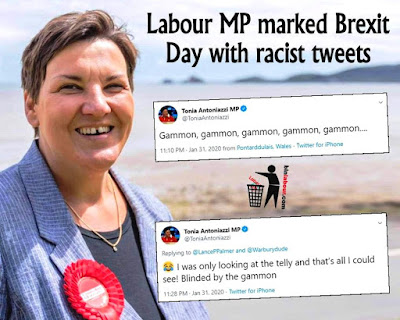 Speaking of injustice, can you guess how many times Tonia has tweeted in support of the thousands of victims of racist grooming gangs?  The answer, of course, is zero.
at June 12, 2020