In recent weeks the mainstream media has declared itself to be politically biased, corrupt and no longer merely news broadcasters, but propagandists for a Marxist cult.  They have decided to collectively shame white people for atrocities that took place so many generations ago that none of us alive today ever met any of those responsible.  They want to shame us all into 'taking a knee' and declare that our ancestors did nothing but bad and our history is something to be detested.  They seek to indoctrinate viewers into believing that black people are somehow oppressed by state-sponsored systemic racism, despite the fact there are few - if any - better places in the world for black people to exist on an equal footing.

If you didn't already see it, watch this propaganda clip from Sky Sports, broadcast in the wake of the supposedly offensive 'white lives matter' banner that was flown over the Burnley football match...

This is former rugby player Mike Wedderburn who, it should be noted, hasn't done too badly for himself considering he is informing viewers how institutionally racist their country is.  Note his BLM badge, once again showing that broadcasters are no longer politically neutral.  "We don't hold positions of influence in organisations" says the black guy who is literally the face of Sky as those words come out of his mouth.  "Black people have been murdered by organisations whose job it is to protect us" he says.  Now murder is a strong word and an even stronger accusation.  Can Mr Wedderburn name these victims, it might help if he could, because there are no court rulings or criminal convictions for such a crime by British police - and make no mistake, he is referring to the police.  That is the media narrative right now.  White people are bad, but the police are evil.

Finally, let's examine his assertion that "nobody is saying that white lives don't matter".  Nobody in their right mind would, likewise nobody is saying that black lives don't matter either.  You'd have to be a hateful bigot to make either statement.  Wouldn't you?  Well, it just so happens that earlier the same day as Sky Sports were indoctrinating us with Mr Wedderburn's statement a Cambridge lecturer tweeted the following... 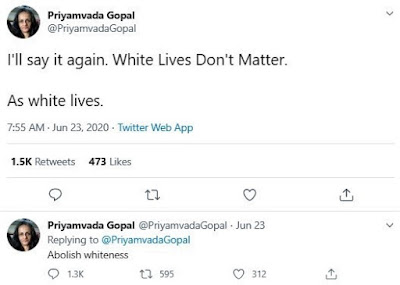 Note that she couldn't quite get it across forcefully enough the first time, she follows it up with a secondary statement: "Abolish whiteness".  It doesn't take a genius to arrive at the outrage such a statement would make if she were talking about any other group of people.  Yet white people appear to be an acceptable target for race-hate.  Remember that the banner flown over the Burnley football match said 'white lives matter'.  It didn't say 'black lives didn't matter'.  And yet the man responsible has been visited by the police, hounded by the media and not only has he been sacked from his job, his girlfriend has also now been fired too.  Contrast this to what has happened in the last two days to Priyamvada Gopal - zero coverage by Sky, the BBC, ITV and Channel 4 and zero condemnation from any racial equality organisation.

In fact, whereas Burnley banner guy was sacked by his employers, Dr Gopal's have actually sprung to her defence and not only that, but have reportedly now promoted her to a full professorship.

While the mainstream media may have ignored this shocking story, many social media users have not.  Dr Gopal and her university have been bombarded with complaints and an online petition to have her kicked out has garnered more than 15,000 names and counting.  Not surprisingly Dr Gopal has received a lot of abuse over her racist tweet and has spent the last two days outing some of the more abusive messengers and goading others.

As with the equally odious Shaun King we reported on earlier this week, Gopal is followed by several Labour MPs on Twitter including Stella Creasy, Clive Lewis, Tanmanjeet Singh Dhesi, Zarah Sultana, Claudia Webbe and Nadia Whittome.  The open borders Labour Campaign for Free Movement also follows her, as do commie Novara Media pundits Aaron Bastani and Ash Sarkar.  Despite the abhorrently racist nature of her Gopal's tweets, many of her colleagues have rallied around her and she even received a message of support from BBC 'comedian' Nish Kumar.

Could you imagine a celebrity expressing solidarity with Burnley banner guy?  He or she would face the sack and, once again, let's remember that his message was neither derogatory or racist.  Dr Gopal's tweet was so racist that even ultra woke Twitter removed it, although her follow-up remark about abolishing whiteness remains at the time of writing.

There is also a shocking double standard on display here from the University of Cambridge.  While it appears to be giving Dr Gopal the benefit of a right to free speech (even if it does incite racial hatred), it has not afforded that same right to others.  Last year the university rescinded an invitation to Toronto psychology professor Jordan Peterson over his views on trans rights.  You'll remember him from his epic take down of Channel 4's Cathy Newman in 2018...

Also last year Cambridge University failed to uphold the freedom of speech of one of its own fellows.  Noah Carl was dismissed from his fellowship at St Edmund's College after ironically finding his work "promoted extreme right-wing views and incited racial and religious hatred".  Among Carl's 'heinous' views included his linking of Islam with Islamist terrorism.  Surely the clue's in the name?  In announcing his dismissal the university announced that Carl's views "fell outside any protection that might otherwise be claimed for academic freedom of speech".  It added: "Diversity and inclusivity are fundamental values of the College and we abhor racism and religious hatred".

So then, why are the rules different for Dr Gopal?  If the same doesn't apply to her overtly racist language then the logical conclusion at which to arrive is that white lives really don't matter.
at June 25, 2020