The departure of Sajid Javid from Number 11 earlier this year left a bitter taste for many in the Conservative Party.  Then came the Budget and coronavirus.  The suave performance of Rishi Sunak in delivering that budget and his many assured appearances in chairing the daily briefings has marked him out as one to watch for the future.  As such he has been spoken of as a 'future leader' or 'future PM' by some commentators, even drawing high praise from the odious Piers Morgan - back in the days before he launched his one-man crusade against the government.

We put it to a poll on the Facebook page and three quarters agreed that he could potentially one day succeed Boris Johnson.  Almost 8,000 votes were counted. 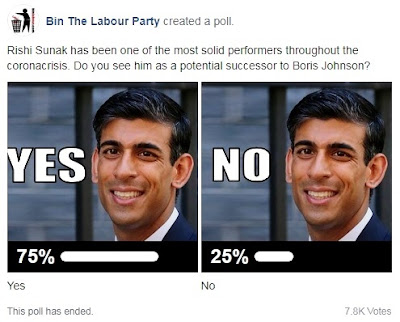 Some comments on this poll suggested that the Tories stand a good chance of electing a BAME leader before the Labour Party has even elected its first female leader.  Of course it goes without saying that Boris Johnson has a huge mandate to go forward as Prime Minister, potentially for many years.  However, there's no harm in knowing that his potential successors include the kind of talent already showing they are capable of slaying Labour.
at June 02, 2020