Keir Starmer has this afternoon sacked Rebecca Long-Bailey as Shadow Education Secretary after she tweeted her support for an actress promoting an anti-Semitic conspiracy theory.  As we reported this morning, the hard left Labour luvvie Maxine Peake suggested that Israel was somehow responsible for the death of George Floyd.  This was the tweet that gave Starmer the perfect excuse to get rid of one of the few Corbyn loyalists he had kept on the front bench... 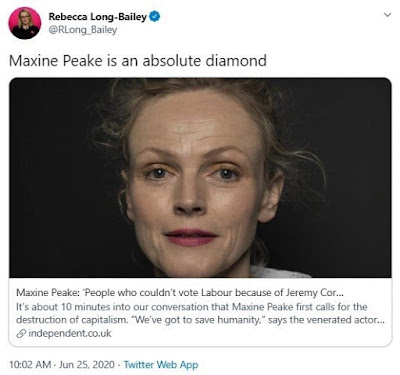 It didn't take her long to realise she'd dropped the ball as she followed up with another tweet to excuse her earlier indiscretion. 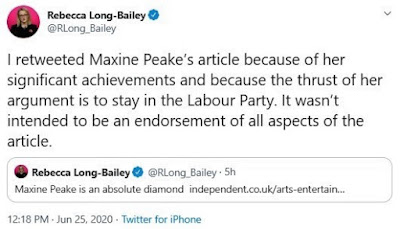 Unfortunately for Long-Bailey it was too little, too late.  A spokesman for Starmer said: "This afternoon Keir Starmer asked Rebecca Long-Bailey to step down from the Shadow Cabinet.  The article Rebecca shared earlier today contained an anti-Semitic conspiracy theory.  As Leader of the Labour Party, Keir has been clear that restoring trust with the Jewish community is a number one priority.  Anti-Semitism takes many different forms and it is important that we all are vigilant against it".

In her interview with The Independent, Peake also called for the overthrow of capitalism.
at June 25, 2020