As predicted, the Marxist terrorists of Black Lives Matter are now turning their attention to Christianity.  Having spent weeks attacking, defacing and toppling statues and monuments to American historical figures, they are now expanding their assault.  This is a video from San Francisco showing the toppling of a statue of Spanish saint Junípero Serra on June 19.

Another statue of Serra was toppled in Los Angeles the following day.  Serra, the rioters claim, is a symbol of Spanish colonialism.  The sight of a cross-wielding saint being toppled and later daubed with red paint will disturb many Christians, but if the BLM insurrection continues unchecked then it's only a matter of time before churches themselves become targets.  St John's Church opposite the White House has already been targeted twice during the rioting.  On May 31 rioters tried to burn it down, but the fire was extinguished by firefighters before it could take hold.  On Monday it's pillars were daubed with graffiti.

The same day a tweet was put out by a prominent BLM supporter who demanded statues of Christ be torn down as depictions of him with white skin were "a form of white supremacy".  Shaun King has over a million follows on Twitter. 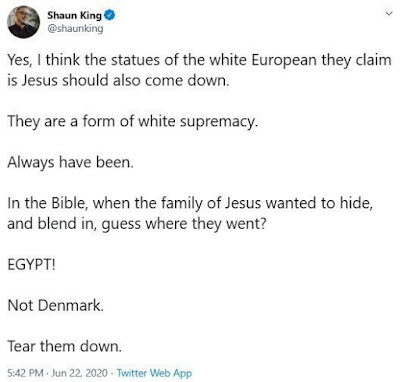 As if that wasn't incendiary or shocking enough, half an hour later he decided to add murals and stained glass windows to the hit list. 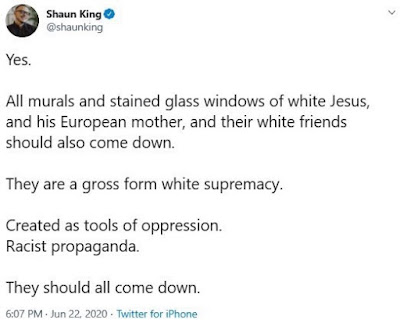 Be extending his list beyond statues to include integral parts of a church building's structure he has made it perfectly clear to his followers that churches themselves are now permissible targets.  Incidentally, Shaun King's Twitter account is followed by a host of UK Labour MPs, including Rosena Allin-Khan, Mike Amesbury, Dawn Butler, Marsha de Cordova, Julie Elliott, Dave Lammy, Clive Lewis, Navendu Mishra, Abena Oppong-Asare, Naz Shah and Sam Tarry.  He is also followed by Owen Jones, Gary Lineker and Momentum.

Religion has always been frowned upon by communists as it was by Marx himself who famously denounced religion as the "opium of the masses".  Religion is seen as incompatible with communism and religious leaders were often persecuted in places like the Soviet Union and Czechoslovakia.  The Communist Party of China to this day keeps places of worship under tight regulations.  Religious faith has always been seen as a potential threat by communist states.

The reason the hard left mob of Black Lives Matter want to target Christianity is to undermine Western civilisation and make their passage of conquest easier.  It's a demoralising tactic that carries the belief that a faithless enemy is a broken enemy.  They routinely burn national flags and target the most sacred of monuments - war memorials - for the same reason.  However, while they hope to rise to power out of the chaos they create, what they will actually achieve in the short term is to harden the resolve of the democratic law-abiding silent majority.  When election time comes around who are those people going to vote for?  The thugs who have razed cities to the ground or the 'other side'.

A month ago President Trump was probably heading for defeat in November's election as coronavirus wiped out the booming economy he'd built over the last four years.  However, the insurrection that has wreaked havoc across Democrat-held cities will have informed voters that perhaps it would be best to stick with him.  The more violent and depraved their actions, the more likely they are to re-elect him.

The same goes for the Tories here.  With tens of thousands of coronavirus dead and the dawn of the worst recession in living memory, by 2024 the Labour Party should be on course for victory.  And yet just as they were making serious inroads in the opinion polls they choose to side with the mob.  The photo of Keir Starmer and Angela Rayner kneeling in submission will come back to haunt them time and again in the years to come.  The longer this crazed assault on British history continues, the bigger the push back will be in that election.

As for potential attacks on Christianity here - the stage is already being set.  A petition promoted by The Guardian on Monday calls for one of Britain's highest honours to be redesigned as it is 'offensive'.  The Order of St Michael and St George shows a traditional depiction of St Michael subjugating Lucifer (he is shown standing on Satan's neck).  The absurd petition reads: "This is a highly offensive image.  It is also reminiscent of the recent murder of George Floyd by the white policeman in the same manner presented here in this medal".  The problem with that argument is that the medal predates Floyd's murder by more than 200 years, but then when did any of this make sense?

Today they may demand a medal redrawn, but next they may target statues depicting St Michael and then after that the churches that house those statues.  As we already know with this insurrection - it's a slippery slope.
at June 24, 2020