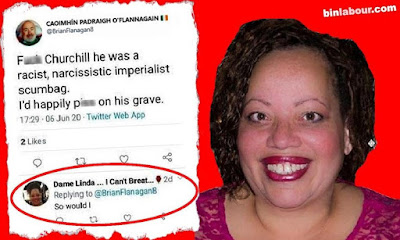 The woman who said she would happily piss on Churchill's grave has confirmed her departure from the Labour Party.  The Watford Observer reported on Thursday that Linda Meehan resigned as the chair of Watford Labour Party on Wednesday and has now left the party altogether.  On Friday Meehan tweeted a photo of her membership card cut up in pieces. 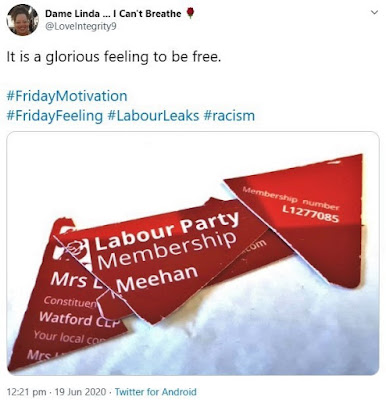 It's not clear whether she jumped or was pushed, but a local Labour activist referenced her departure on Twitter, saying that she'd been "driven out by vile racist abuse and physical threats".  Lester Holloway said the abuse had initially occurred in the comments section of the Watford Observer, but had later spread to Twitter.  He did not provide any further details, but hit out at Churchill in a follow-up tweet, referring to him as a 'genocidal racist'.

It's quite ironic that these people hurl around the word 'racist' so freely.  After leaving the party Meehan shared a YouTube video which she claims shows an "illuminating discussion from genuine anti-racists".  The five-way Zoom discussion features no less than three ex-Labour members expelled from the party amid accusations of anti-Semitism.  Ex-Labour MP Chris Williamson chaired the two-hour discussion in which the five speakers rail against Israel, Zionism, mainstream Jewry, Keir Starmer and anyone else who they perceive to part of the conspiracy out to get them.  Williamson made sure he got his Palestinian flag in frame for the discussion.

Having instantly ingratiated herself with this mob, one might inquire as to whether Meehan's hatred of Churchill was really all about his views on race - or whether it was borne out of his opposition to the Holocaust and his support for a Jewish state.
at June 21, 2020