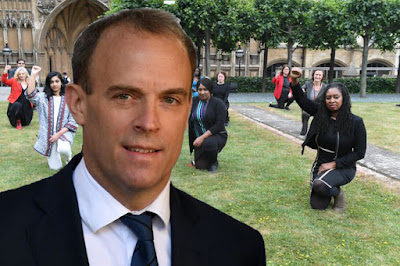 The Foreign Secretary has told TalkRadio's Julia Hartley-Brewer that he kneels before only two people: Her Majesty and "the missus when I asked her to marry me".  Dominic Raab said the practice feels "like a symbol of subjugation and subordination rather than one of liberation and emancipation".  Watch below.

Raab has been immediately condemned by Labour politicians and the left-wing media.  In linking the gesture to the TV show Game of Thrones he's been accused of ignorance.  If Raab knew the broader history of 'taking the knee' he may well have even less respect for the practice.  It not only insulted the majority of Americans when it was done by Colin Kaepernick, but it's an insulting gesture for any human being with an ounce of self-respect.  The sight of English footballers kneeling before last night's matches sickened many viewers.  Taking the knee in support of a foreign Marxist movement is about as un-British a gesture as there can be, so perhaps it's no great surprise to see Labour MPs jumping on Raab's back this morning.

For some reason those expressing their condemnation were overwhelmingly London MPs...

Diane Abbott (Hackney North & Stoke Newington) tweeted: "Taking the knee” began in 2016 with American athletes refusing to stand for US national anthem.  They were protesting police brutality and racism.  But Dominic Raab thinks it comes from Game of Thrones!!!"

How good of Diane to give the Foreign Secretary a history lesson, asserting that Kaepernick and his fellow footballers were the first to 'take the knee'.  Meanwhile, here's a picture of Martin Luther King taking the knee in 1965, a mere 51 years earlier.  Poor effort Diane! 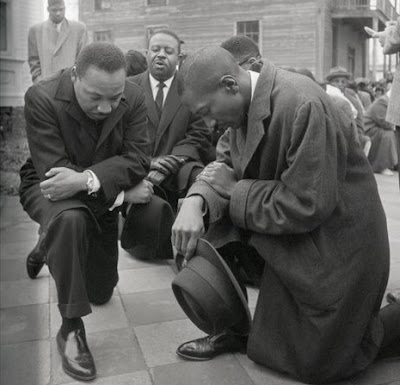 Sarah Jones (Croydon Central) tweeted: "After every premiership player and ref did it on the pitch last night?  Such lack of leadership at the heart of government".

Stephen Kinnock (Aberavon) tweeted: "You can see the reaction Dominic Raab and his ilk are looking for, just by reading the replies on this thread.  It's completely wrong how the Tories are trying to spark a highly unnecessary and damaging culture war.  Most in Britain will see through it".

Actually Stevie, most people in Britain will support Raab on this.  Furthermore, the use of the term 'culture war' is a bit rich considering it's the knee-bending BLM Marxists who are desecrating statues, war memorials and trying to remove all British cultural landmarks.

Dave Lammy (Tottenham) tweeted: "This is not just insulting to the #BlackLivesMatter movement, it is deeply embarrassing for Dominic Raab.  He is supposed to be the Foreign Secretary of the United Kingdom".

Wes Streeting (Ilford North) tweeted: "Every day, Government ministers flaunt their ignorance like it's a qualification.  He's the Foreign Secretary".

Emily Thornberry (Islington South & Finsbury) tweeted: "Did I hear this right?  Taking the knee comes from Game of Thrones?!! #BlackLivesMatter".

Remainers have also been ripping Raab on Twitter, for purely bitter Brexit reasons, including Ken Clarke and Anna Soubry.  The non-entity interim leader of the Lib Dems has even gone as far as to demand that Raab issues a public apology and takes the knee.

It's not Dominic Raab who is out of touch.  A few thousand protesters do not speak for the nation.  Opposition politicians may well continue to support this nonsense, but see how the electorate repay your parties outside your London bubble.
at June 18, 2020