The 1987 general election saw the first black MPs elected to Parliament - Bernie Grant and Diane Abbott - plus the mixed race Paul Boateng and South Asian Keith Vaz.  These were indeed landmark elections, but 33 years is an odd time to bring them to the fore.  And yet Labour politicians of today heralded the anniversary as if it was some key milestone.  Starmer, Corbyn and many other Labour MPs recorded special tributes to these MPs, gushing over Diane in particular.  It was all clearly orchestrated to exploit the current racially charged climate.


Asides from the obvious 33rd anniversary cop-out (incidentally they weren't shouting about it last year), there was little mention of Keith Vaz.  In fact poor old teflon Keith was left out of almost every tribute.  Why?  Because he's not black like the others, and the name of the game at the moment is 'black lives matters' - not 'black and Asian lives' or 'BAME lives'.  Keith was surplus to requirements.

Keir Starmer paid tribute to Diane Abbott and said her 'dedication to equality continues to inspire us'.  Really?  The same woman who has consistently displayed open hostility to people based on the colour of their skin?  Only last month she was exposed in a Zoom video call ranting about white people and calling for black, Asian and Muslim people to unite in a clear call for racial division.  That Labour now want to celebrate this woman as some form of crusader for racial equality and harmony is nothing short of sick.

In recent days there has been no greater example of the despicable nature of this woman than in her silence on two well publicised criminal acts in Hackney.  On Tuesday a policeman was assaulted in an unprovoked attack by a gang of black youths.  His colleague, a female officer, was also assaulted when she came to his aid.  The incident was filmed and went viral on social media.  Diane said nothing.

On Friday, elsewhere in her constituency, a rabbi was stabbed in broad daylight.  The man responsible was apprehended by members of the public and arrested on suspicion of attempted murder.  Again, Diane said nothing.

It is totally reprehensible for a local MP to ignore two major criminal acts in her constituency and especially sickening that it comes at a time when her party leader and colleagues are giving her such high praise for her work.  Of course we know only too well why she isn't interested in attacks on police officers and Jews.  She only beats the drum for black lives.  The lives of police officers, white people and Jews are not important.  In other words, their lives don't matter.  Meanwhile, during this same period she is only too happy to engage in the tactics of the hard left from America and call for the disarming of our police service... 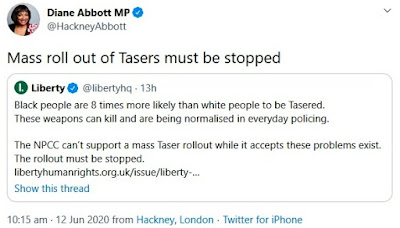 If the current insurrection gains pace, the next step we will see is calls to 'defund the police'.  There may even be attempts to annex communities and expel the police, as has occurred in Seattle in the last week.  You can bet your bottom dollar that Diane Abbott won't speak out against that either.
at June 13, 2020