It was perhaps no great surprise that the left suddenly fell into a collective silence last night as news spread of a potential Islamist terror attack in Reading.  The serial tweeters who have been so busy whipping people up into a frenzy in recent weeks had precisely nothing to say.  Or did they?

This was the very disturbing photo that Novara Media's Ash Sarkar posted at 22:05, well after the news had broke. 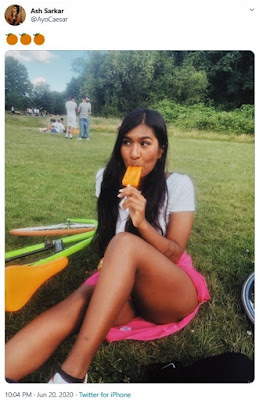 The image of Sarkar smirking as she relaxed in a park setting turned a lot of stomachs, coming as it did at a time when most people were taking in the horror of what was unfolding in a park in Reading.  There's no way she couldn't have known about the attack - the news was all over Twitter at the time and she is, after all, supposed to be a journalist.  Some Twitter users even suggested that the three emojis that accompanied her odd tweet may have been intended to represent the three suspected fatalities of the attack, but surely this would be too callous - even for a hateful communist like Ash, surely?

Meanwhile, her pal Little Owen couldn't even muster a cryptic reference to the attack.  His only post on Twitter last night was a complaint about a new parody account in his name.